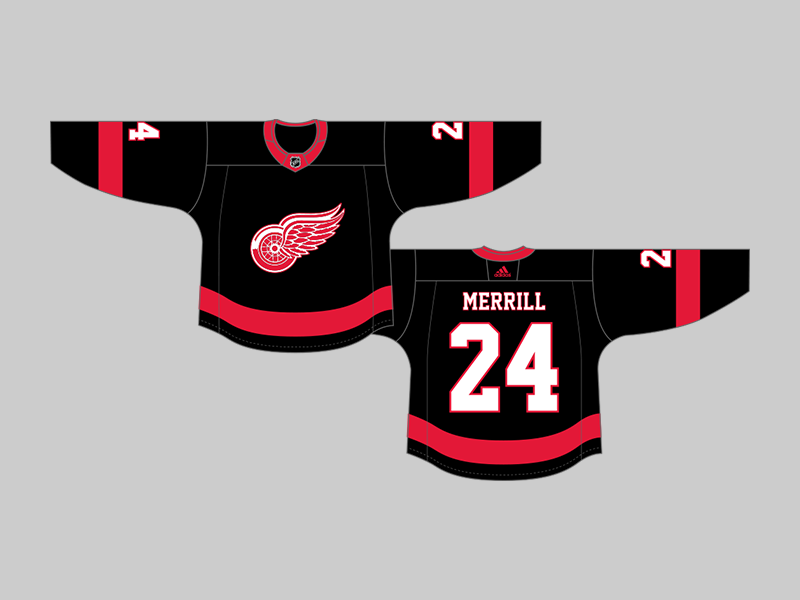 On the “Reverse Retro” Teaser and Detroit’s Possible Jersey

509
0
by Clark Rasmussen
In General

A couple weeks ago I took a look at what the Red Wings might wear as their jersey in the NHL’s upcoming “Reverse Retro” program.  The league and adidas released a teaser for that program today, and nothing else is going on for the Wings, so here are some updated thoughts.

There are 31 different color/number combinations, so it appears that this video shows each team’s colors and the year of the jersey being used as inspiration.

Of immediate note is the fact that there is no red and white jersey.  There is, however, a green and white jersey (presumably the Dallas Stars, wearing something based on their 1999 set).  As such, it’s safe to assume the teaser doesn’t just replace white with black for the sake of being cool or something like that, these are the actual colors for each team’s jersey.

Also of note is that there is a black and red jersey with the number 40 on it.  The 1940 jersey would have to represent one of the Original Six teams but red and black don’t fit for Boston, Montreal, New York, or Toronto, leaving only Detroit and Chicago.

Chicago would make more sense for red and black, except for the fact that there’s a red, black, white, and tan #95 jersey later in the video.  The Blackhawks are the only NHL team to have worn that combination of colors, which leaves the Red Wings as the only team left for the #40 jersey to represent.

The interesting thing, to me, about the Red Wings using black is that it seemingly confirms that the Detroit Falcons never used yellow, which I wrote about last month.

Either of Detroit’s sweaters from 1940 could be color swapped to have a black body and red stripes.  The only difference would be the positioning of the waist stripe.  The other variable would be whether the “Reverse Retro” jerseys feature the current version of the Winged Wheel or the 1940s-era version.

“Reverse Retro” concept based on the NHL/adidas teaser video

Update, 3:20 PM: I’ve been talking with Chris Creamer of SportsLogos.Net about this and he has a different theory.

He thinks that the #40 jersey is Chicago and that the #95 red, black, white, and tan jersey represents Ottawa, with the tan coming from the skin tone used on the Senators’ alternate logo introduced in 1997.  I think that’s a bit of a stretch, but it does lead to a few other shifts from my original list that make sense.

In the end, it leaves the Red Wings represented by the #98 jersey, white with silver stripes and red numbers.

I really dislike this as, while black as a Detroit color may be questionable, at least the Falcons wore it for two seasons.  The Red Wings have worn silver for a grand total of one game, with it appearing as two stripes on the Centennial Classic jerseys from 2017.

If Creamer is right, though, what would that look like?

Given that the promo image is white, I think they’d be using their 1998 home jerseys as a base, swapping the sleeve color from red to silver.  Maybe the white stripes become red.  The result ends up like this:

I don’t know.  That just seems pointless to me.  That said, as I mentioned in my original post, a series like this is always going to be difficult when it comes to the Red Wings because they haven’t had enough jersey/color changes to work with.  Maybe any “Reverse Retro” option for Detroit is going to be a stretch.

Update, 4:10 PM: The Red Wings seemingly confirmed that they are the red, white, and silver #98.

The concept of this series seems to be to take a jersey template each team has worn and switch the colors to match a different era.  For the Wings, that’s hard, they’ve been red and white forever and their jerseys have barely changed.  But to take what is essentially their current jerseys and swap out their primary color for one they’ve worn in a single game in their entire history?  You couldn’t be just a tiny bit more creative?


Fabric of the Game