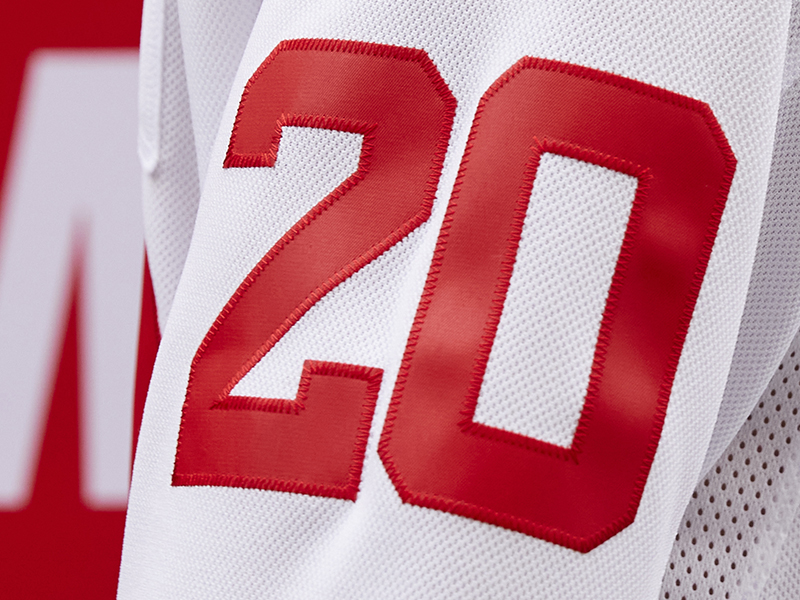 That, of course, includes the Red Wings, who tweeted the following:

Details from the past.
Remixed for the future.

Based on last week’s teaser video, we already knew that the Red Wings would be using one of their 1998 jerseys as a base, swapping in silver on at least part of it.  What we see here appears to be a jersey with white sleeves and body, so it’s probably the red jersey with that color swapped out for white.

With all of that in mind, this could be what Detroit’s “Reverse Retro” jerseys will look like:

I used the silver-ified Winged Wheel from the Centennial Classic but it could just as easily be the standard one.

That said, via Twitter, Ryan Haruta pointed out a spot in the teaser image that looks like red fabric stitched onto white.

Definitely not just the background pic.twitter.com/BcAyUyd5Hl

Is that a different logo, such as the Old English D?  Is it a red stripe?

There doesn’t seem to be a lot of cross-era logo switching going on in this series, so I don’t think it’s a different logo.  I lean towards that being a stripe and I wonder if the silver from the first teaser is not actually present on the jersey, in which case we’re looking at this:

“Reverse Retro” concept based on the Red Wings’ 1998 away jersey.

The full set of “Reverse Retro” jerseys is slated to be revealed tomorrow.

Update, 1:00 PM: After further discussion, that red-on-white bit could be the jersey number on the back, which was already expected to be red.  If that’s the case, that little bit tells us nothing about the stripes or logo, and I’m back to expecting the silver-striped sweater mocked-up above.

Fabric of the Game