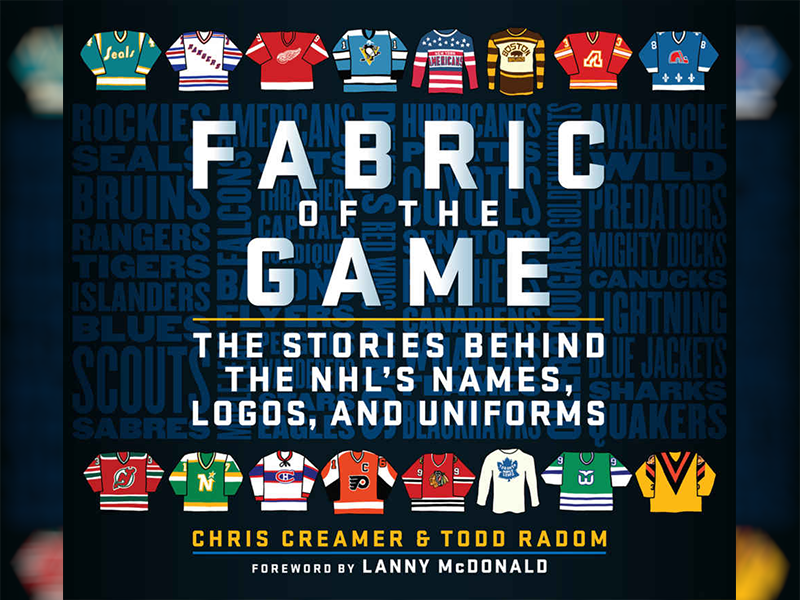 Fabric of the Game

128
0
by Clark Rasmussen
In Book Review

Fabric of the Game: The Stories Behind the NHL’s Names, Logos, and Uniforms was my most-anticipated hockey book of the year and it hit shelves last Tuesday.  My copy finally arrived this week and now that I’ve had a chance to actually read it, I figured I’d do a quick write-up of it.

Full disclaimer: I’m friends with co-author Chris Creamer – I’ve written for his site, DH.N’s work is cited in the book, and my name appears in the acknowledgements – and have heard about much of his research as he was putting the project together.  I’m quite obviously biased when it comes to this.  That said, as I’ve previously stated, I judge history books by whether or not I learn anything new from them and, as I heard many of the stories while the book was in development, that relationship means I didn’t learn much from the book, which I’d normally take as a strike against it.  I’ll try to balance all of that here.

Fabric of the Game is a team-by-team look at the sweaters and identities of the NHL’s past and present.  As the subtitle states, this is a focus on the stories behind these identities.

Some of those stories are more interesting than others and that shows in the book.

Modern identities are designed such that no element is meaningless.  The 31 points in the current Toronto Maple Leafs logo, for example, are said to represent 1931, the year the team opened Maple Leaf Gardens.  The 17 veins in the leaf represent the team’s founding in 1917.

The number of feathers on Detroit’s Winged Wheel, meanwhile?  No reason behind that, it’s just an evolution of a logo that debuted in 1932.

This means that some iconic looks don’t actually have much of a story behind them, and nothing Creamer or co-author Todd Radom could write would change that.

As something of an aside, the story behind the Detroit franchise’s name change from Cougars to Falcons – which I won’t recount here – still blows my mind.  When I first heard it, I couldn’t believe it, and I still can’t.

It’s important to note that focus on the stories, as this isn’t simply SportsLogos.Net: The Book.  Though there are plenty of gorgeous illustrations by Radom and glossy photos straight from the Hockey Hall of Fame, you won’t see a lot of logo or uniform timelines.

For a self-professed logo geek such as myself, it was a really fun read with interesting tidbits you won’t find anywhere else.

On the “Reverse Retro” Teaser and Detroit’s Possible Jersey