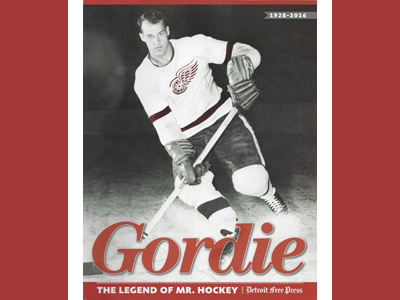 60
0
by Clark Rasmussen
In Book Review

I was recently asked to review the Detroit Free Press’ Gordie: The Legend of Mr. Hockey.  Due out in a couple weeks, the book is a collection of stories about Gordie Howe‘s career and a celebration of his life.

I say “a collection of stories” because it’s not a single, chronological narrative.  It doesn’t read like a standard biography.

Starting with an obituary by Mitch Albom and coverage of Howe’s visitation at Joe Louis Arena and his funeral, it moves on to a brief biography of his playing years in the context of his recent death.

These aren’t new or exciting stories.  If you were paying any attention last June, you’ve already read some version of them.  They are a fitting tribute, however, and a beautiful read.

From there it’s on – somewhat jarringly – to the debate about Howe’s controversially stem-cell treatment in 2014.  Then to anecdotes about Howe from the Freep’s writers and Howe’s contemporaries, and quotes from Howe himself.

The book closes with excerpts from Mark Howe‘s book, Gordie Howe’s Son, and from the 1999 Free Press book, Century of Champions, before a look at Howe’s single-shift appearance with the International Hockey League’s Detroit Vipers and a recap of his career statistics.

The knock on this is that it’s structured like a coffee table book but it’s a paperback, with the result something more like a Sports Illustrated collector’s edition.

Of course, like those SI issues, collectors of Red Wings memorabilia will want this on their bookshelves.

As I said, you won’t find anything new here.  My favorite part was the Mark Howe piece, which was just an excerpt from another book.  These aren’t new stories but the value is having them collected in one place.

Gordie: The Legend of Mr. Hockey, will be available on September 1.


Kronwall Out of World Cup