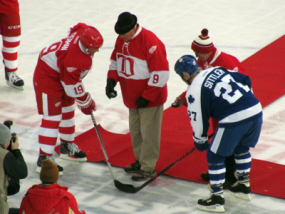 93
0
by Clark Rasmussen
In General

I never met Gordie Howe. I’m too young to have seen him play, outside of his one-shift stint with the Detroit Vipers. I am not the person to eulogize him.

We all know the stories. They’re pouring out onto the internet today. Stories that make us laugh. Stories that remind us of Old Time Hockey. They’ve been told for years, the legends of our sport.

There’s one story that always sticks with me. One video clip from the end of his career. His introduction at the 1980 NHL All-Star Game. The last All-Star Game of his career, returning to the NHL after it absorbed the WHA, his only NHL season not played with the Red Wings, and a game played in Detroit.

“Representing all of hockey with great distinction for five decades… Number Nine!”