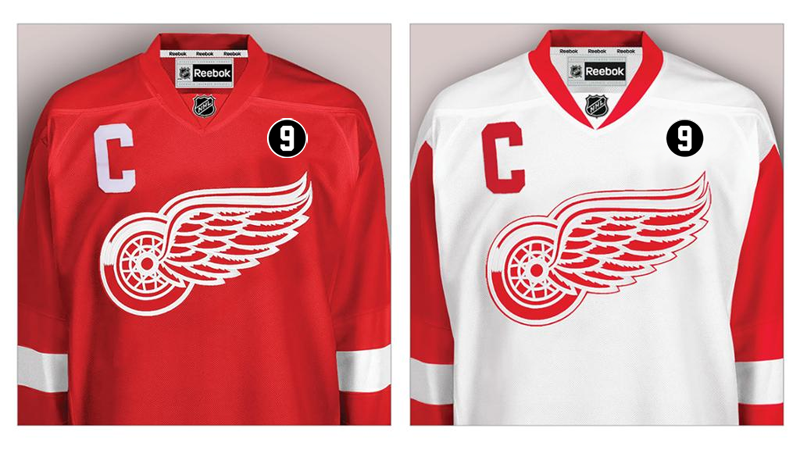 138
0
by Clark Rasmussen
In General

I’ve already established that I’m rarely a fan of the design choices made by the Red Wings or the Griffins.  As such, it should come as no surprise that I’m disappointed by the patch that the Wings will be wearing this season to honor Gordie Howe.

It’s a 9 in a box.  Why is it in a box?  So that you know it’s a patch?  That makes no sense to me.  So you’ve got two design elements and one of them is pointless.  The following are my attempts to make it better.

My first version simply takes the existing patches and switches which jersey they’re on. By having a contrasting background, you still get the “Hey, this is a patch” thing they seem to be going for without looking like “a 9 in a box” as I said above.

If you’re insistent on the number itself being the contrasting color, eliminate the box completely and just go with the 9 as a patch. Personally, I think this would look better on the shoulder of the sweater (similar to what the Philadelphia Flyers did for Pelle Lindbergh), but I get that there’s symbolism to having the patch over the players’ hearts.

I like the tried-and-true method of a black circle with a number or initials inside it. This could go on the chest or on the shoulder.  This is my personal favorite, the following three are really just here to show that there are ways to play with it a bit more.

Or you can go way out there and have the Winged Wheel inside the #9. Personally, I don’t think this looks very good in this application, but it was the image DH.N ran with at the time of Howe’s death.

Finally, you could go with a version that has a bit more information.  In this case, the 9 is black with a white outline on a red circle.  A black circle wraps that, inside of which is the text “Mr. Hockey Gordie Howe 1928-2016.”  It’s more complicated than it needs to be but I still think it’s better than a 9 in a box.