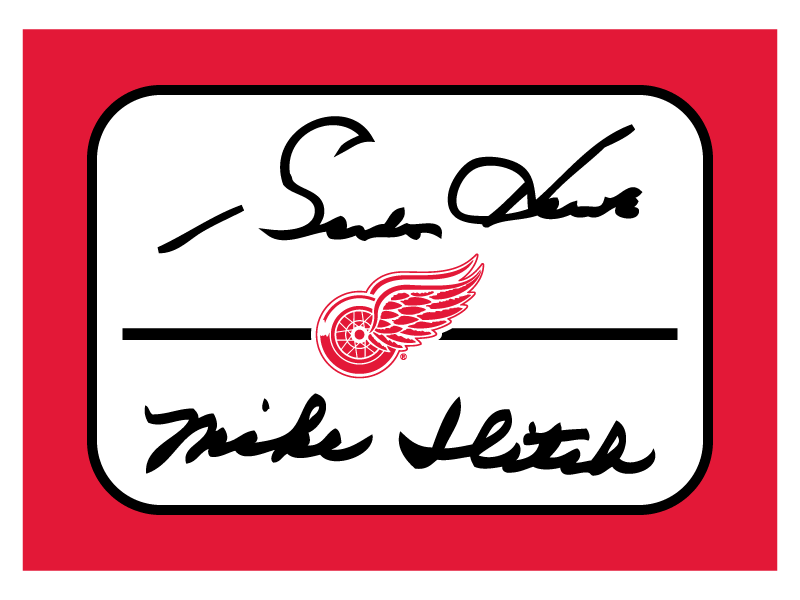 The Red Wings are expected to reveal an on-jersey tribute to owner Mike Ilitch, who died last Friday at age 87, tonight as they host the St. Louis Blues.

I’ve commented before on the Red Wings having a tendency to make their memorial patches “text in a box” and I expect we’ll see something along those lines tonight.  With that in mind, I’ve put together something I’d like to see the Wings do.

First off, if I were the team, I’d scrap the Gordie Howe patch (which I never liked anyway) and make a combined patch for Howe and Ilitch.  I’d put this new patch on the shoulder and restore the “Farewell to the Joe” patch to the opposite shoulder for symmetry.  Since the arena patch is probably gone for good, keeping the memorial patch on the chest is also feasible.

My idea for a Gordie Howe / Mike Ilitch memorial patch.

The patch would feature the signatures of the two men, one over the other, separated by a black band with the Winged Wheel over it.

I thought about using the blue from the “Believe” patch the Red Wings wore in honor of Vladimir Konstantinov and Sergei Mnatsakonov and the “BM – RS – SL” patch memorializing Brad McCrimmon, Ruslan Salei, and Stefan Liv, but ultimately went with black because I thought the signatures should be black and didn’t want to introduce an additional color.

I have no idea what the team will actually do and I doubt it will be this.  I suppose we’ll see in the coming hours.