Just hours after I posted my proposal for a Mike Ilitch memorial patch, the Red Wings unveiled what the team will actually wear.

Surprising no one, it’s another “text-in-a-box” patch.

Since the 1998 season and the “Believe” patch, the Red Wings have unveiled six special event patches.  The 75th anniversary design was worn only for a few games.  The “Farewell to the Joe” patch was abandoned.  All of the rest (the BM/RS/SL patch, jersey retirement patches for Steve Yzerman and Nicklas Lidstrom, and memorial patches for Gordie Howe and Mike Ilitch) have been some form of text inside a box.

I think it’s lazy and not a fitting tribute. 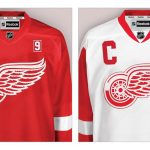 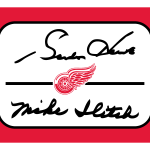