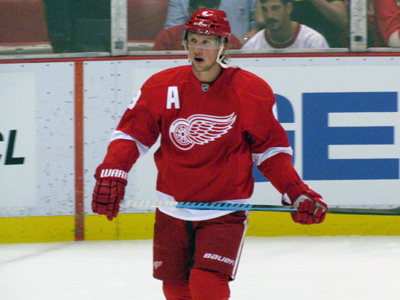 126
0
by Clark Rasmussen
In General

Justin Abdelkader will make his first appearance of the preseason in Chicago tonight and the Red Wings didn’t wait any longer than they had to before naming him as the team’s new alternate captain.

Yeah, they used the word “assistant.”  Whatever.

Abdelkader takes on the ‘A’ left behind by Pavel Datsyuk’s trade to the Arizona Coyotes and subsequent departure for his native Russia.

It’s the first time the Red Wings have named a new alternate since Niklas Kronwall replaced Kris Draper in the three-man rotation for the 2011-12 season.  When Henrik Zetterberg ascended to the captaincy in 2014, the team simply went back to two alternates instead of replacing him.

The Red Wings did not assign an extra ‘A’ in cases of injury throughout the 2015-16 season.  The only players on the active roster to have previously worn a letter for Detroit in a regular season game were Jonathan Ericsson (three games) and Darren Helm (one game) during the 2014-15 campaign.

I don’t think this comes as a surprise to anyone.  The buzz surrounding the ‘A’ had been focused on Abdelkader all summer and he’s really the most logical choice, after accepting Dylan Larkin wasn’t going to get it.

Update, 11:30 AM: The Red Wings deleted their original announcement tweet and replaced it with one using the word “alternate” instead.  Small victory.