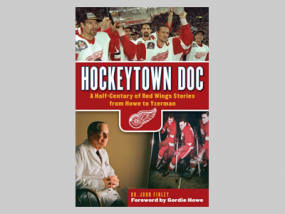 105
0
by Clark Rasmussen
In Book Review

I was recently asked to take a look at Dr. John Finley’s new book, Hockeytown Doc – A Half-Century of Red Wings Stories from Howe to Yzerman.  By coincidence, the request came on the heels of posting my thoughts on Tal Pinchevsky’s Breakaway: From Behind the Iron Curtain to the NHL – The Untold Story of Hockey’s Great Escapes.  I’m not looking to get into the business of book reviews but with no NHL games, I’m already reading more.

Over at Winging it in Motown, J.J. posted his thoughts on Friday but I’ve deliberately not read what he wrote, so our opinions may have some overlap.

Dr. Finley has assembled 23 chapters of anecdotes and personal thoughts formed over fifty years on the Red Wings’ medical staff.  His viewpoint from three rows behind the bench and inside the dressing room is unique.

It’s that perspective that makes the book worthwhile.  Some of these stories are things we’ve heard before.  His chapter on the Russian Five, for example, has a lot of overlap with Breakaway.  However, there were parts of those familiar stories that were new, things that only he could tell.

My personal favorite chapter was “Spring Fling,” in which he tells stories of the team party he and his family hosted every year.  A party so appreciated that, as Dr. Finley says, Bob Probert once asked to be invited back even if he was traded away from the Wings.

Another thing that struck me was how similarly former Red Wings’ czar Jack Adams and current team Vice President Jimmy Devellano were described.  This probably shouldn’t be a surprise, given Adams’ attempts at union-busting and Devellano’s recent “cattle” comment but it wasn’t until reading Dr. Finley’s words that the idea really clicked for me.

I do have some nit-picks about the book.  As a collection of 23 relatively-independent chapters, there’s a decent amount of repetition.  The roles of certain people are described multiple times, for example.  We’re told that Original Six-era dressing rooms were made up of “benches above which were hooks” several times.  Additionally, I caught at least one mistake in a player’s name, with Kris Draper being called Chris Draper.

As I said, those are nit-picks, the only things I could find wrong in an otherwise well-crafted piece of storytelling.