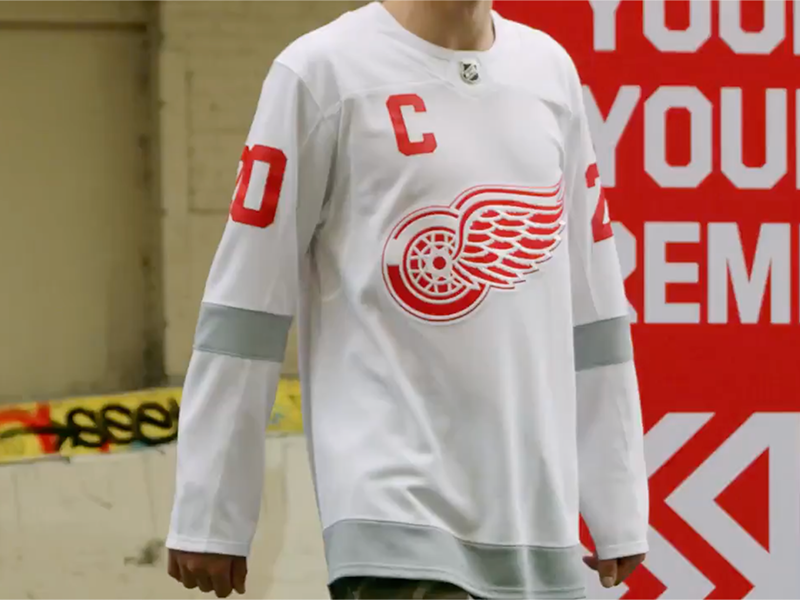 236
0
by Clark Rasmussen
In General

After a week of teasers, the NHL and adidas released each team’s “Reverse Retro” jersey on Monday.

The concept of the series is to take an iconic look from each team and swap the colors around.  For some teams, that means bringing an alternate color to the forefront.  Some took inspiration from previous iterations of their franchise, while others used a mish-mash of logos, jerseys, and colors from their history.

With Detroit having worn red and white for their entire history and using essentially the same uniforms since 1932, that didn’t leave them much to work with.

The Red Wings’ “Reverse Retro” sweaters are based on their 1998 away jersey – virtually identical to today’s home sweater.  The red base has been swapped to white while the white numbers and lettering become red.  The white sleeve and waist stripes, instead of becoming red, switch to silver.

That silver was pulled in from Detroit’s Centennial Classic jerseys, the only time the Red Wings have worn a color other than red or white on their sweaters (though the Detroit Falcons included a black outline on red text in their 1930-32 set).

I have a lot of problems with this set and the series in general, many of which I’ve mentioned over the past week.

Pulling in silver for Detroit’s jersey – a color worn on a grand total of two thin stripes in a single game in their history – seems like a stretch.  Moreover, swapping out red in favor of that color feels like it goes against the Red Wings’ identity.  I’m not saying that, just because the team has red in its name, they can’t use colors other than red on their jerseys (the Vegas Golden Knights’ home jerseys are primarily grey, after all).  They don’t even look all that bad.  I just don’t think they look right.

This is a league-wide series and adidas was in charge from the start.  I think it’s pretty clear that they had good designs for much of the league and, when it came down to it, they weren’t going to scrap the idea just because Detroit and Toronto were hard to work with.

Even that’s not entirely true, though, as I’ve posted concepts over the last week that, at least to me, look better than this.  So there were possibilities there, adidas just chose to go in a different direction.

At least it’s not that ridiculous “Digital Six” set from a couple years ago.  So they threw some random silver on the Red Wings’ sweater and called it a day.  It seems lazy to me, that’s all.