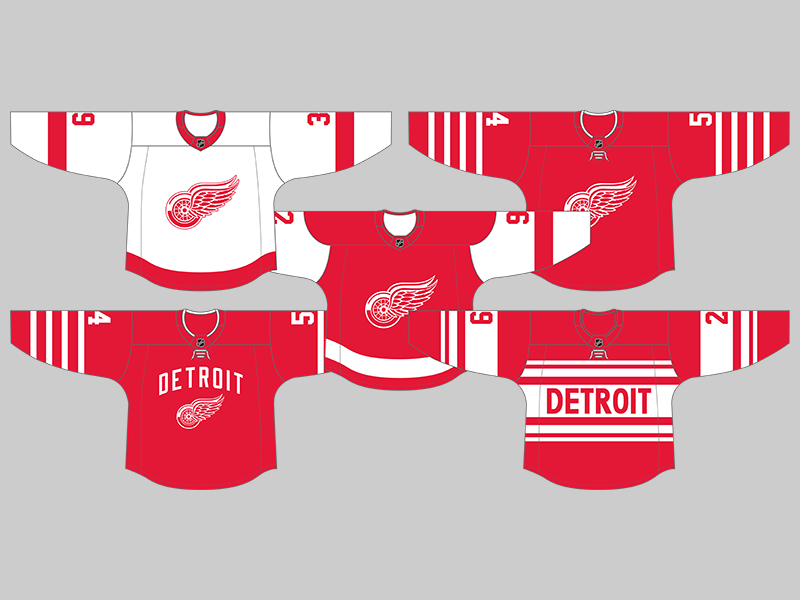 On Possible “Reverse Retro” Jerseys for the Red Wings

276
0
by Clark Rasmussen
In General

All is quiet around the Red Wings as we wait for news of Tyler Bertuzzi’s arbitration ruling.  With that in mind, and with last week’s leak of several “Reverse Retro” jerseys across the league, I figured I’d take a look at what the Wings could wear as part of this program.

Not much is known about the NHL’s new fourth jersey program.  Supposedly, every team will participate, regardless of whether or not they have a third jersey.  Additionally, the rumor is the program has been driven by the league and adidas, rather than the individual teams, and as such has some rules to be followed.

The Pittsburgh Penguins’ leaked design, for example, takes their mid-1990s road (black) set, flips the colors to become a white jersey, and the switches the athletic gold to the “Vegas gold” the team introduced in 2000.  The Philadelphia Flyers, meanwhile, use a version of their orange jersey introduced in 1982 with the black and white swapped.  Vegas’ design is taken from the Las Vegas Thunder of the International Hockey League, with the Golden Knights’ colors and logos swapped in.

Further, there are rumors that the Montreal Canadiens will wear a jersey based on their current home sweater, with the blue and red swapped, and the Washington Capitals will wear a version of their mid-1990s set in red, white, and blue.

So if we’re assuming the base will be an existing jersey – rather than a totally new one – with its colors swapped, where does that leave Detroit?  The team has a lot of history to work with but not a lot of different designs or colors, giving them a surprisingly limited set of options.

Detroit could wear a color-swapped version of their current home jersey, which would essentially be their road jersey without the red sleeves.  The team wore this as their road jersey from 1934 to 1961, though, and if this Reverse Retro program is intended to avoid actual throwback jerseys, it would seem this would be ruled out.

They could color-swap their current road jerseys, giving them a red jersey with white sleeves.  It’s a clean look that the team has never worn but others across hockey have, so it might not be an option, either.

“Reverse Retro” concept based on the Red Wings’ current away jersey.

The Wings could go back to their roots as the Detroit Cougars.  Even then, though, there are issues.  Their initial set from 1926-27 was the basis of those 2009 throwbacks and the color-flipped version has already been worn in the Alumni Showdown as part of the 2013 Hockeytown Winter Festival.

The Red Wings wore the 1927-28 Cougars’ sweater as part of the NHL’s 75th anniversary proceedings in 1991-92.  I suggested the color-swapped version as a possible option for what was then the 2013 Winter Classic but, as I noted then, the red lettering on a white stripe seemed off to me.  With a new template, I drew it up anyway, and don’t dislike it as much as I did originally.  It could be an option.  That’s a lot of stripes, though.

“Reverse Retro” concept based on the Detroit Cougars’ 1927-28 sweater.

Out of sheer, morbid curiosity, I swapped out that red “DETROIT” text for the Winged Wheel and…  It’s certainly something, but, again, isn’t as bad as I expected.

“Reverse Retro” concept based on the Detroit Cougars’ 1927-28 sweater, with the Winged Wheel in place of the “DETROIT” text.

The 1928-29 set opens up another option.  This is the sweater that the Centennial Classic jersey was based on and a color-flipped option has never been worn, though I suggested it in that Winter Classic concept series and the eventual 2014 Winter Classic jersey did take some cues from it.

“Reverse Retro” concept based on the Detroit Cougars’ 1928-29 sweater.

The 1928-29 sweater also gives options for the crest, depending on what the Reverse Retro “rules” are for such things, as the standard Winged Wheel could be used, or it could be placed under “Detroit” text as the cougar head logo was in the original.

So these might be the options we’re looking at for Detroit’s coming “Reverse Retro” jersey.  Or there could be other rules for these jerseys that we don’t know yet, opening up other choices.  Maybe they’ll decide the Falcons’ brief use of black is enough to make the Red Wings’ old black fashion jerseys an official alternate.  With the entire 2020-21 NHL season in flux, who knows when we’ll even see the actual designs?

That said, for a team with as much history as Detroit, I like to see them pull from it more.  The 1928-29 Cougars’ set would be a safe place to go for that.

The usual jersey design caveats apply here, of course.  These aren’t meant to be predictions, just artists renderings of possibilities.  They’re not even my designs, really, just existing jerseys redrawn into a modern template with the colors appropriately swapped.