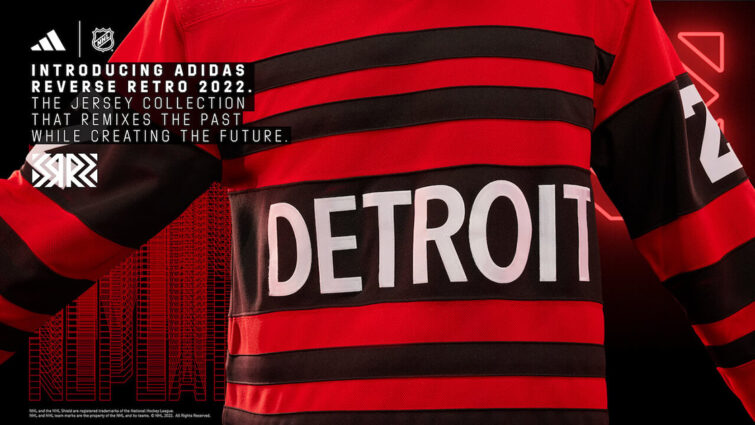 One day after teasing its design, the Detroit Red Wings unveiled their jersey for the 2022 edition of the NHL’s Reverse Retro program.

Barber pole is back! 💈

Instead having a white base with red stripes, this edition is red with black stripes.  The “Detroit” lettering across the chest remains white, as do the player number and name on the back.  The unveiling video excluded sleeve numbers but promotional photos show that they are also white.

The inclusion of black is interesting to me, as it seems to confirm that the Detroit Falcons wore sweaters that had red lettering with a black outline, rather than yellow lettering with a red outline.

Based on Wednesday’s teaser, I’d thought that the jersey would be white with red stripes, but what I thought was white was just red in red lighting.  Oops.

I like this design a lot more than Detroit’s entry in the 2020 edition of the Reverse Retro program but the red and black stripes feel like a Chicago Blackhawks jersey.  Especially with the Blackhawks rolling out a Reverse Retro that says “Chicago” across the front.  Once again it’s disappointing but at least this time I can understand some fans liking it in a vacuum, as opposed to 2020’s glorified practice jerseys that had no redeeming qualities.

I guess that makes this set a win but only because of the remarkably low bar set by the last iteration.

Update, 3:10 PM, 10/21/2022: One of my initial complaints about this design was that the white lettering looked out of place. I understood needing it for contrast (red lettering on a black stripe would have been unreadable) but the color balance just felt all wrong.  Then the Red Wings released photos of Dylan Larkin in the new gear and…

I am absolutely amazed at how different that looks.  I don’t know if it’s the fit or the lighting or the background but the official Adidas photos look awful compared to the Larkin photos.

I’d still prefer a red and white version of this – a true reversal of colors – and I still think there were better options out there, but I can get behind this idea a lot more than I originally would have.

And speaking of that red and white idea…

For the “they should have just flipped red and white” crowd. pic.twitter.com/FExYZDKapU