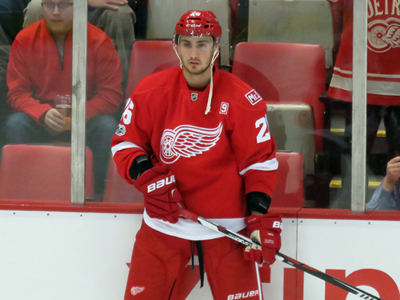 The Red Wings opened up their trade deadline sale on Friday afternoon, sending restricted-free-agent-to-be Tomas Jurco to the Chicago Blackhawks for a third-round draft pick.

As I said in my trade deadline preview yesterday, Jurco wanted out and wasn’t getting opportunities in Detroit anymore, so it’s not a surprise to see him dealt.

Honestly, I’d expected him to get waived at a handful of points this season, so getting a third-rounder for Jurco is pretty fantastic in my mind.

As I said via Twitter, this feels a bit like the Wings dumping Aaron Ward in 2001.  A perfectly serviceable player who wasn’t happy in Detroit and will go on to bigger and better things elsewhere.  Now it’s up to Ken Holland to do the same thing he did then, turn that draft pick into something useful.  The Ward draft pick became Jiri Hudler.  Let’s see what this pick becomes.