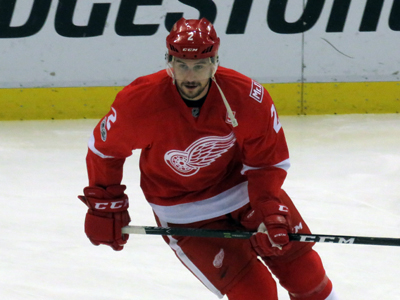 The Detroit Red Wings made their first real move a sellers at this season’s NHL trade deadline on Tuesday, sending defenseman Brendan Smith to the New York Rangers for a second round draft pick and a third round draft pick.

Pending a trade call (not official until then), DET will get 2nd rder and 3rd rder, both in 2017, from NYR for Brendan Smith.

McKenzie later corrected that the second-round pick will be in 2018, as the Rangers gave up their 2017 pick trading for Eric Staal last season.

The Wings had previously sent Tomas Jurco to the Chicago Blackhawks, but he wasn’t playing in Detroit anyway so it didn’t mean much.

With the Red Wings far out of the playoff picture and the trade deadline just over a day away, this move isn’t entirely unexpected.  That said, there was some buzz about the Wings re-signing Smith, though that would have given them a glut of defensemen heading into next season.

I like the move.  A second rounder plus “something else” was about the most the Wings could have expected for Smith and I like the “something else” being a usable pick (and a decent one at that) rather than a warm body for the rest of the season.  Additionally, I was wondering earlier today if the Wings might go for 2018 picks given how the 2017 draft is regarded as shallow.