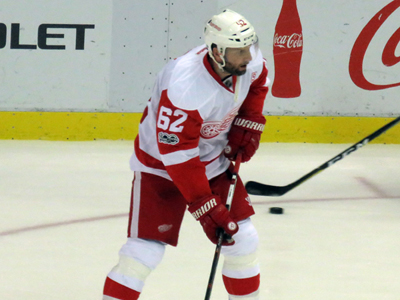 The NHL’s trade deadline is less than a week away and – in the middle of their “bye week” – the team sits last in the Atlantic Division, only two points up on the Carolina Hurricanes (who have four games in hand) for last in the Eastern Conference, and twenty-sixth overall in the thirty-team league.

For the first time in a quarter century, the Red Wings will (in all likelihood) not make the playoffs.  As such, they’ll be sellers at the trade deadline.

Detroit general manager Ken Holland insists that the team will not be torn down in a total rebuild.  He expects only to unload “rentals” – players who will be free agents this summer anyway.  With that in mind, there are three players who we can probably expect to see moved.

Thomas Vanek
Vanek has been one of the Red Wings’ top forwards this season, leading the team in goals with 15 in just 47 games played.  He was signed last summer to a cap-friendly one-year deal as a reclamation project and is just the kind of player a team looking to make a playoff push would want to add.  The only hiccup is that he reportedly loves Detroit and Holland may choose to simply extend his contract rather than trade him and risk being unable to bring him back this summer.

Brendan Smith
At 28, Smith is no longer a prospect, he’s a known quantity.  He could be a solid addition to a team like the Pittsburgh Penguins (who, as I write this, traded for Ron Hainsey), looking to shore up their defense.  That said, Holland has stated that he’ll talk to Smith’s camp about a contract extension, so he could stay put.  The Red Wings have five defensemen already under contract for next season, plus restricted free agents Nick Jensen and Xavier Ouellet.  If Jensen can do Smith’s job at half the price (or less), it makes sense to get what they can for him.

Steve Ott
Ott signed with his “hometown” Red Wings last summer and was excited to come to Detroit.  He clearly wants to be here.  I’ve been against his signing from the start.  There are a lot of GMs who love the kind of player he is, even if I don’t.  He could be a cheap veteran addition for a team looking for a little extra grit.

In addition to the above three, there are a few others in unique positions that could see them dealt.

Drew Miller
Exiled to the Grand Rapids Griffins in the face of a roster crunch in Detroit, Miller has made it clear that he’d like to be traded and get back into the NHL.  His position is similar to Ott’s, as a veteran grinder who would come cheap, except for the fact that he already cleared waivers so any team that wanted him will have already passed him up.  The Wings would likely have to take a player back in any deal for Miller.

Tomas Jurco
Jurco has been stuck in the press box for much of the season and doesn’t seem to have a future in Detroit.  He reportedly requested a trade earlier in the year and will be a restricted free agent this summer.  That said, if the Wings were to sell on Vanek and Ott, it would seemingly open up a roster spot in Detroit for Jurco to get more playing time.

Tomas Tatar
Tatar has been one of the Wings’ top forwards this season but has been plagued at times by accusations of not living up to his potential.  He’s a restricted free agent this summer, likely due a raise from the $2.75 million he makes now to something close to the $4.75 million of Gustav Nyquist.  The Chicago Blackhawks called about Tatar and Nyquist earlier this season, so if the Wings wanted to avoid paying Tatar, they could ship him out now.

Finally, there’s a small group of players that might have value but probably won’t be dealt for various reasons, primarily because – as stated above – the Wings say they’re not tearing the team down.

Gustav Nyquist
Signed for two more seasons after this one and currently suspended, the Blackhawks did ask about him, so the possibility of moving Nyquist is there.  Even more than Tatar, Nyquist can’t shake the “underperformer” label and the Wings may want to dump his salary to facilitate re-signing Tatar (or anyone else).

Mike Green
Green has one year left on his contract for $6 million, so any team looking to acquire him wouldn’t be going for a rental.  If available, though, he’d be one of the top defensemen on the market and could probably bring in a decent haul for the Red Wings’ reload.  It’d also clear a lot of money from the Wings’ cap.  I don’t expect him to be dealt but I think it’s an intriguing possibility.  Green does have a no-trade clause.

Jimmy Howard
I don’t expect Howard to be traded at the deadline, lets get that out of the way.  But – especially if he’s not claimed by the Vegas Golden Knights in the expansion draft this summer – the Wings are going to have quite the logjam in goal to deal with, plus a lot of money dedicated to goalies.  Clearing that up sooner rather than later would be to Holland’s benefit, so he should be trying to move Howard now.  Of course, Howard is currently hurt and has no timetable for return, so pulling off this move would be near-miraculous.

My prediction? Vanek and Smith or Ott get traded.  Maybe Miller, especially if Ott stays.