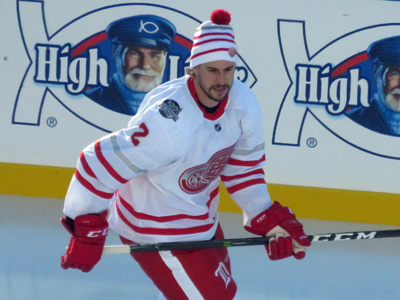 I was feeling pretty good about the Red Wings’ efforts in the lead up to the NHL’s trade deadline this morning.  Then the Thomas Vanek trade happened.  Those who follow DH.N on Twitter know I am less than happy about that but I’ll look at each of the Wings’ moves piece-by-piece here.

Tomas Jurco
The Red Wings traded Tomas Jurco to the Chicago Blackhawks last Friday.  An upcoming restricted free agent, Jurco never really latched on with the Red Wings.  Detroit got a third-round pick in the deal, which is more than I would have expected.

I don’t think Jurco was ever used properly in Detroit so it hurts to see him go to Chicago, but if the Wings weren’t going to use him, at least they got some value for him.  This is a pretty solid deal.

Brendan Smith
The first of Detroit’s pending unrestricted free agents, the team tried to sign him to a contract extension but the trade offer from the New York Rangers was too much to turn down.  Smith netted the Red Wings a third-round pick in the upcoming 2017 NHL Entry Draft and a second-round pick in 2018.

This was Detroit’s best move of the week.  I probably would have been happy with a second or a third, to get both feels like larceny.  That said, like Jurco, perhaps Smith just needs a change of scenery.  It’s not that he was particularly bad this year in Detroit, but he’s weighed down by the expectations and the memory of bad performances.

Steve Ott
I never liked Ott’s signing, that’s no secret.  I don’t know why the Canadiens thought they needed him, either.  He wasn’t horrible in Detroit by any means, I just think his role could have been filled by one of the kids in Grand Rapids, namely Tyler Bertuzzi or Tomas Nosek.  Getting a sixth-round pick for Ott seems like a near-miracle.

Thomas Vanek
I’m going to need more space for this one.

Nick Jensen
Not a trade, the Red Wings locked up Jensen for two more years at around $800,000 each.  Jensen has stepped onto the Wings’ blue line and seemingly leapfrogged both Ryan Sproul and Xavier Ouellet (and definitely Alexey Marchenko, now in Toronto).

I like this signing for multiple reasons.  One, it’s only two years, unlike the ridiculous four-year deal that Brian Lashoff got after serving in a similar capacity back during the lockout-shortened 2013 campaign.  Two, it can entirely be buried in the minors if Jensen ends up being a bust or if the Wings acquire a legitimate top defenseman at some point.

Mitch Callahan
With Ott off to Montreal, the Red Wings called up forward Mitch Callahan to take his place.  I’m okay with this but I’d rather have seen Bertuzzi get the nod, as I mentioned above (Nosek is currently injured and wouldn’t be called up).

Drew Miller
The trade that didn’t happen.  I don’t know if anyone was interested in Miller but he’s the one upcoming unrestricted free agent that Holland was unable to unload.  Part of me thinks that if you can unload Ott, you can unload Miller.  But maybe the Habs were the only team interested in a guy like that.

Vanek had to be dealt.  He’s been one of the Wings’ best players this season and is an unrestricted free agent this summer, so it was assumed that he had significant value.  At the end of the day, it sounds like there weren’t that many teams interested, though, and he only fetched a third-round draft pick (plus AHLer Dylan McIlrath, minus retaining some salary).  That the Wings got the best deal they could get is good.

It’s kind of hard to see that for multiple reasons, though.  There was a lot of buzz about Vanek in the lead up to the deadline and Minnesota made a massive deal for Martin Hanzal, a player deemed to be somewhat comparable to Vanek.  You don’t trade buzz, though.  The best player the Red Wings had to offer simply wasn’t enough to generate that much interest.

Winging it in Motown’s JJ from Kansas has been talking about getting caught up in the hype about Vanek.  Take a look at Detroit’s history as buyers, though, and it’s hard not to.

So it’s disappointing that costs are high when the Wings are buyers but they’re low when they’re sellers.  It’s hard to swallow.  It feels like if the Wings should have to sell, they should get to sell for the same prices that all the teams that profited from them got to sell at.

Overall
All of that said, the Wings did the best that they could with what they had.  In sheer volume of picks, the last week has been a pretty impressive haul.

I’m not as excited about the upcoming draft as Ken Holland is, though.  Holland has spoken about having so many picks to work with, more than they’ve had since 2002.  This draft is shallow and none of those picks are particularly high.  As such, I don’t see this sell off as sparking a rebuild.  Barring some big changes this summer, I don’t think the assets gained in the last week are going to turn things around next year.