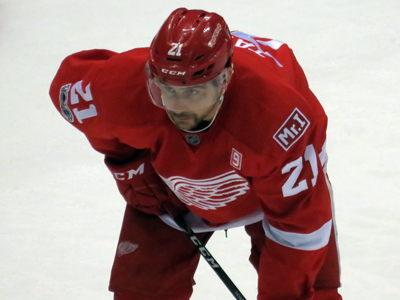 With the trade deadline having passed, we can start to get a look at the contracts the Red Wings will likely carry into next season, and from that see what the team might look like.

The bad news: It’s a lot like this one.

The only unrestricted free agents in the Wings’ lineup right now are Drew Miller and Mitch Callahan.  Assuming they don’t return (or end up in GR, where Callahan was recalled from yesterday), Detroit’s roster is as follows:

So where does that leave the Red Wings as far as options for getting better?

With all of the picks they grabbed at the trade deadline, there’s the draft, but unless they manage to win the draft lottery I don’t think you can expect anyone Detroit selects this summer to be NHL-ready next fall.

The Wings could call up players from the Grand Rapids Griffins to rebuild from within.  Maybe they give Matt Lorito a chance or Evgeny Svechnikov.  That’s what a truly rebuilding team would probably do.

There are trades, which Ken Holland has spoken a little bit about over the last couple days.  That said, Holland’s plan late last summer was to trade the team’s forward depth for defensive talent and those deals weren’t there.  The market will be different this summer and the expansion draft may impact things as well but if the Wings’ history is any indicator, this path can’t be relied on.

Finally, there’s Detroit’s tried-and-true method: Free agency.  Go back to that list of players, though, and pick the one(s) you see being exiled from the lineup in favor of a newcomer.  Unless the Wings are willing to bench a player like Luke Glendening or Riley Sheahan, there’s only one spot on the roster for adding players.

As I said, there is the expansion draft to make things interesting.  If I’m Ken Holland, I hope for Vegas to claim Jimmy Howard, freeing up cap space and solving the goalie logjam.  That doesn’t open a spot anywhere that they’d want to sign a free agent, though.

Holland is going to have to get creative.  Maybe that means trading a player like Sheahan to the Golden Knights in return for them agreeing to claim Howard, which would given them cap space and an extra roster spot to add forward help.

Without that creativity, though, we’re already looking at next year’s lineup, and we know that’s not good enough.