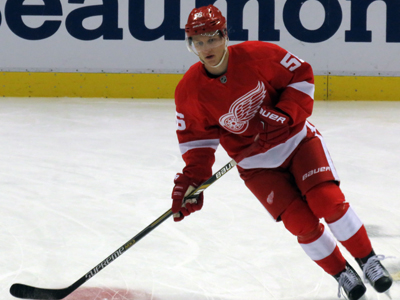 Steve Ott had previously Tweeted he would take the #29 that had briefly been assigned to Dylan Sadowy and was worn by Landon Ferraro before he was waived and claimed by the Boston Bruins.

With it available, it comes as no surprise that Frans Nielsen takes the #51 he wore with the New York Islanders.

As Tomas Jurco has the #26 he usually wears, I’d expected Thomas Vanek to take the #27 made available by the departure of Kyle Quincey.  Instead he flips the number and takes #62.  He’ll be the first Red Wing to ever wear that number.

I’d thought that Alexey Marchenko might see a new number this year to represent his solidified roster spot.  While I thought he’d get the #4 formerly worn by Jakub Kindl, instead he went the opposite direction and took the #53 he’s been wearing internationally.

The #4 ended up going to Teemu Pulkkinen, switching from #56.  I’m on the record as disliking forwards wearing numbers that low.  He becomes the first forward to wear #4 for the Red Wings since Colin Campbell in 1985.


Zetterberg Out of World Cup