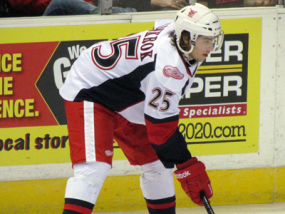 125
0
by Clark Rasmussen
In General

I’ve already looked at the Red Wings’ jersey number changes this season but now that the Griffins have released their camp roster, I can do the same for them.

None of last-season’s full-time Griffins are changing their numbers for the coming year but all of the players who joined the team late in the season have been assigned different numbers than those they wore during Grand Rapids’ Calder Cup run.

Defenseman Ryan Sproul gives up the #2 he had been wearing (having inherited it from Cody Lampl and Carlo Colaiacovo) to Joe Hartman, switching to the #7 vacated by Brendan Smith’s ascension to the Detroit roster full-time. Fellow blueliner Xavier Ouellet switches from #37 to #16 while Richard Nedomlel goes from #41 to #45, a rare case of a Griffin wearing a high number.

With Ouellet taking #16, Marek Tvrdon drops to the #13 previously assigned to Gustav Nyquist, who seems poised to make the jump to the Red Wings.

Teemu Pulkkinen switches from #26 to the #6 that was briefly assigned to Andreas Athanasiou, with #26 going to free-agent signing David McIntyre. Calle Jarnkrok drops from the #25 he shared with Mike Knuble last year (and was originally assigned to Damien Brunner) to the #12 vacated by Brent Raedeke’s departure. Kevin Lynch picks up the #25 from Jarnkrok.

Goalie Jared Coreau gets his usual #31, meaning that he joins Landon Ferraro (#29) and Petr Mrazek (#34) as the only Griffins assigned the same number in Grand Rapids as they are in Detroit.

Joakim Andersson’s old #18, Chad Billins’ #14 and Danny DeKeyser’s #55 were not assigned for camp.