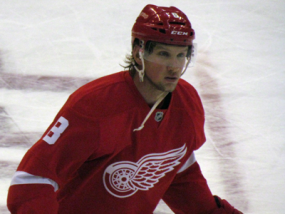 Yahoo Sports’ Sean Leahy sent out a batch of Tweets earlier today with rosters and jersey numbers for each team in the World Cup of Hockey.

With Henrik Zetterberg and Niklas Kronwall out for Sweden, the Red Wings have representatives on five of the eight teams.

For Team USA, Justin Abdelkader will wear #89 – his old high school number – which he wore while captaining the Americans at the World Championships in 2014.  The #8 he wears in Detroit is taken by team captain Joe Pavelski.

Oddly, Alexey Marchenko will wear his now-old #47 for Team Russia. He just switched to #53 with Detroit and wore that number – which is available – with the Russians at this year’s World Championships.

Team Europe features Tomas Tatar in #21, which is slightly weird because he usually wears #90 in international competition. Thomas Vanek gets the #26 that’s not available to him in Detroit while Frans Nielsen gets his usual #51.

For Czechia, goalie Petr Mrazek gets his regular #34.