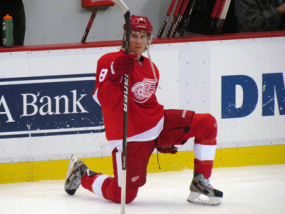 164
0
by Clark Rasmussen
In General

I realize that most fans – most players, even – don’t care about sweater numbers a whole lot. I do, though, so I’ve been thinking about what hoops would need to be jumped through to get the Red Wings’ recent acquisitions assigned numbers that are familiar to them in Detroit.

Daniel Alfredsson is easy if Daniel Cleary ends up not returning, as his #11 suddenly becomes available. If Cleary does return, however, there are a couple options.

Alfredsson has always worn #11 professionally but he was forced to switch to #9 for the 1997 and 2004 All-Star Games and to #15 for the 1996 event. Of course, #9 isn’t going to be an option in Detroit but #15 could be. I’ve already advocated taking #15 from Riley Sheahan and assigning it to Anthony Mantha as it was his grandfather’s number, but Alfredsson will be done with it by the time Mantha might need it.

Alternately, we have a trio of switches that gets three players into “their” numbers. Cleary only wears #11 because it was what was assigned to him when he made the Detroit lineup as a tryout. The number he wore in juniors and at least once in the minors was #8. Justin Abdelkader currently wears #8 but, like Cleary, only because it was assigned to him. In fact, several years ago it was rumored that he requested to switch to the #89 he wore in high school but it never happened. So give Abdelkader his #89 and it opens up #8 for Cleary which opens up #11 for Alfredsson.

Do I expect it to go down that way? No, not really, I just like ways for players to have numbers that mean something to them rather than just randomly-assigned numbers.

Stephen Weiss is a little more of a problem. His #9 isn’t going to happen, nor is the #19 he wore during his rookie year. He wore both #12 and #14 with the Chicago Wolves but neither of those is available (Gustav Nyquist has said he has no intent to switch from #14 to the #89 he wore in college, which wouldn’t be possible if Abdelkader took it first anyway). Weiss wore #22 for Canada at the World Juniors but Jordin Tootoo won’t be giving that up (though he might end up being traded). Going the Mike Modano route and changing from #9 to #90 might not even be an option, as reportedly Tomas Tatar has requested to switch from #21 to #90.

I’ve got no answer for Weiss except maybe it’s time to find a new number. A bunch of numbers with #9 as one of the digits are open.

Speaking of people changing numbers, I haven’t seen anything confirming it but I fully expect Joakim Andersson to take the #18 abandoned by Ian White next season.