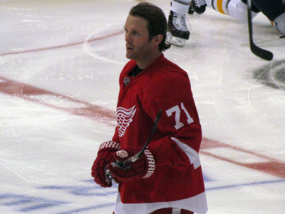 250
0
by Clark Rasmussen
In General

Thursday’s announcement of Daniel Alfredsson‘s retirement from hockey was expected. Daniel Cleary taking warmups in Detroit nine hours later wearing the number 11 jersey he forfeited to Alfredsson last season was not. With Cleary set to become the first Red Wing since Mark Mowers in 2003-04 to wear two different jersey numbers in a single season, lets take a look at the numbers he’s been associated with in Detroit.

#73 – Coming to the Red Wings in 2005 on a training camp tryout, Cleary was assigned the number 73 jersey that reflected his long-shot chance of making the opening night roster. He played well enough wearing it to earn a contract with the Wings.

#11 – Upon making the Red Wings’ lineup Cleary switched to the number 11 that had been worn through camp by Matt Ellis. Cleary had never worn the number before in his career but it followed Detroit’s trend of giving mid-season acquisitions a jersey number that was already assigned to a prospect who wouldn’t make the team (Ellis would debut the following season wearing number 8). He would wear the number uninterrupted for eight seasons.

#71 – Alfredsson’s arrival in Detroit in 2013 coincided with the apparent departure of Cleary, so Alfredsson claimed the seemingly-abandoned number 11, a number he’d worn for his entire career with the Ottawa Senators. When Cleary signed a one-year contract with the Red Wings on the eve of training camp, he showed up in Traverse City wearing number 71. The switch was supposed to be temporary as he planned on reclaiming his number (Alfredsson was set to switch to the number 24 he had worn in Sweden) but the NHL skewered that idea as Winter Classic merchandise for Alfredsson had already been created, leaving Cleary forced to switch.

#15 – During the 2013 training camp, Cleary stated that he would not wear number 71 in the regular season and instead would switch to the number 15 assigned to Riley Sheahan, with Sheahan switching to number 24 to accommodate the chance. This switch didn’t happen, though.

#17 – After securing another one-year deal with the Red Wings in the summer of 2014, Cleary came to training camp wearing number 17 as number 11 was still being held for Alfredsson, who had yet to decide whether or not he would retire. Cleary would wear this number for six regular season games before Alfredsson’s retirement allowed him to switch.