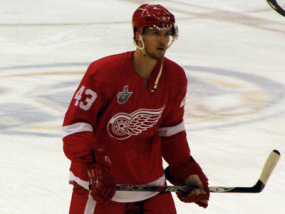 As I mentioned last year, I look forward to training camp not because it marks the start of the start of the season but because I’m a sweater numberphile and as camp rosters are released we see what players are switching numbers.

So far no news is out from the Wings camp but there are five regular players I’m keeping an eye on this season and a handful of likely Griffins, as well as one rumor.

I expected Darren Helm to switch from the #43 he’s worn for his entire Detroit career last year and I still think that’s an option this year. The #15 he’s worn in Grand Rapids is currently available and the #14 he wore in Medicine Hat of the WHL could become available if the Red Wings move Derek Meech to clear up their logjam on the blueline.

Assuming Helm doesn’t take #15, it seems a natural fit for depth defenseman Andy Delmore, who wore that number in his 2005 training camp stint with the Wings. His preferred number is #5, which no player other than Nicklas Lidstrom will ever wear again with Detroit. He wore Niklas Kronwall’s #55 while playing in Germany for the Hamburg Freezers for the last two seasons, #5 having been unavailable.

Now that he’s assured a spot in Detroit, Ville Leino may look to move to a familiar number. He wore #89 with Jokerit and the Wings organization has never had a problem giving out high numbers, so that switch is possible.

Jonathan Ericsson will likely stay with his #52 as he’s had the opportunity to switch in the past without doing so. He reportedly was told by teammates that a big guy like him needed a big number. The #4 he wore last season in Grand Rapids is available, though, so it’s an option for him to switch to.

Jason Williams has returned to Detroit and it’s likely he’ll go back to the #29 he wore during his first stint as well as while he was in Chicago and Columbus. The #14 he wore in Atlanta could be available if Meech is moved but Helm could also be interested in it.

Patrick Eaves seems set to go with the #44 he’s worn in Ottawa and Carolina, now available with the departure of Aaron Downey. He wore the unavailable #9 at Boston College and #7 with the Binghamton Senators so he may have no attachment to #44 and could switch to something else.

That switch might be needed if the rumors of Todd Bertuzzi coming back to the Wings are true. Bertuzzi has worn #44 for most of his career, including his first stint with Detroit, but has worn #4 and #7 since then.

Doug Janik has worn #3 for most of his career but isn’t likely to take it from the injured Andreas Lilja. His fall-back #33 is also taken, as it was when he wore #21 for the Montreal Canadiens. If Leino changes, Janik could go with that number. Similarly, if Helm makes a switch we could see Janik go with the #43 he wore with the Hamilton Bulldogs. The #11 he wore with the Rockford IceHogs is unavailble.

Last on my watch list is Justin Abdelkader, who is unlikely to change from the #8 he inherited from Matt Ellis in 2008. He has previously said that he doesn’t worry about the number he wears but did choose #19 in Grand Rapids in honor of Steve Yzerman. He wore #89 in high school at Mona Shores so he could take that if Leino doesn’t. The #9 he wore in Cedar Rapids and for two years at Michigan State is, of course, unavailable, as is the #18 he wore for his freshman year at MSU.

The Red Wings’ official web site is, as per usual, no help. It has traditionally been late to add updated sweater numbers and currently lists Williams, Eaves, Delmore and Janik without numbers.