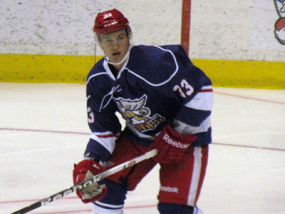 As I’ve mentioned every summer for the past few years, I love it when the Red Wings’ training camp rosters come out and we get to see who will be wearing what number. I’m a geek about sweater numbers (as seen with yesterday’s post on how to get Alfredsson into #11) so that’s fun to me.

With today’s release of the jersey numbers for Detroit’s 2013 Development Camp, we can get a look at some of the changes soon to come. Last year we were told that development camp numbers meant nothing but only Luke Glendening (who was on a tryout at the time of the development camp) switched between camp and the Red & White Game in January, so I think it’s safe to use these numbers as indicators.

Of immediate note, the recently-signed Glendening has moved from the #72 he wore in camp and the #65 he wore in the Red & White Game (now taken by Danny DeKeyser) to #21. That number had been assigned to Tomas Tatar, so the fact that Glendening has it now seems to validate the report that he’d requested a switch to #90.

Similarly, Phillippe Hudon has been given #63 (he wore #61 last year), which wouldn’t be available if Joakim Andersson were not switching. I’d been expecting Andersson to take #18 as soon as it became available, which is the case with Ian White no longer on the team.

It’s worth noting that no number changes were expected for goalies Petr Mrazek and Tom McCollum but Mrazek’s #34 was assigned to free agent Andrew D’Agostini and McCollum’s #38 went to tryout Toni Eskelinen.
It would appear that Tomas Jurco will not be switching back to #28 now that it has been made available by Carlo Colaiacovo‘s buyout as it’s been assigned to free agent invitee Trevor Hamilton. Other numbers that had been assigned to a player last year include Jan Mursak‘s #39 (given to first-round draft pick Anthony Mantha), Kent Huskins‘ #3 (given to Nick Jensen) and Joey MacDonald‘s #31 (free agent signing Jared Coreau).
The only player keeping the same number from last year’s camp is Marek Tvrdon, who holds on to #60.

The changes from last year are as follows (excluding free agent invitees who are returning):

The final switch is a humorous one. Red Wings’ goaltending prospect Jake Paterson switches to the #36 previously assigned to goalie Jordan Pearce, while the #68 he wore last year will be assigned to free agent tryout goalie Jake Patterson (that number was worn by Chad Billins, now in the Calgary Flames organization, during the Red & White Game).

Numbers for players marking their first appearance at the development camp are as follows:

Bertuzzi’s #59 had previously been assigned to Francis Pare, who signed with TPS of Finland today as an unrestricted free agent.

Update, 11:25 PM: The Left Wing Lock’s Sarah Lindenau Tweeted the following regarding the numbers assigned during the Wings’ development camp:

I would not read anything into the jersey numbers assigned for #drwdc. As has been the case in the past… #redwings
— Sarah Lindenau (@Lindy72) July 8, 2013

These numbers can be reassigned from camp to camp. just because it appears a number has changed that may not be the case #drwdc #redwings
— Sarah Lindenau (@Lindy72) July 8, 2013

It doesn’t mean andersson has given 63 in search of another number, etc. these switches are made at #drwtc and #drwdc #redwings
— Sarah Lindenau (@Lindy72) July 8, 2013

This was the rule of thumb given last year by Boyer and I am sure it hasn’t changed. #drwdc #redwings
— Sarah Lindenau (@Lindy72) July 8, 2013

As I said at the top, we were told last year that the development camp numbers meant nothing. That was a season that saw Brian Lashoff switch from #25 to #23 and Martin Frk assigned the #48 that had been worn the prior season by Cory Emmerton. Weeks later, Emmerton’s switch from #48 to #25 was announced.

Clearly some of these numbers mean nothing. I would be shocked if Zach Nastasiuk ever wears #62 in a regular season game for Detroit (or if he’s even wearing it in the next camp). Similarly, I don’t expect Andreas Athanasiou to wear any number in the 70s if/when he cracks the lineup.

Whether intentional or not, the trend for the Wings is that players wearing numbers in the 50s or higher are the guys not expected to crack the lineup that year and they wear numbers that may be randomly assigned. The lower your number gets the more likely you are of a call-up, until you’re actually assigned a “real” number.

In his first camp, Tomas Tatar wore #72. The next year, when he was in line for a call-up during the season, he was down to #21. Landon Ferraro wore #57 in his first camp and was down to #41 last year. We’ll see what number he actually wears if and when he ever makes his debut.

In the time that I’ve been watching the camp numbers, no prospect has ever been assigned the number of a player already on the Red Wings’ roster. Much like Frk getting #48 last year was a sign of Emmerton’s upcoming switch, I think #21 and #63 being assigned makes it safe to say Tatar and Joakim Andersson will be getting new numbers next year. No, I don’t know it for certain, it would just follow the trend. A prospect being assigned the number of a roster player seems to mean something.

Perhaps #34 and #38 were given out because those numbers went to free agents who won’t be back for the main camp, when Petr Mrazek and Tom McCollum return. Or maybe McCollum will finally take the #33 he wore in junior. Those two we’ll have to wait to see.