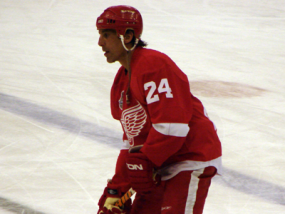 58
0
by Clark Rasmussen
In General News

Two longtime Red Wings were named as part of the Hockey Hall of Fame’s 2013 class on Tuesday afternoon.

Defenseman Chris Chelios and forward Brendan Shanahan are joined by Scott Niedermayer, Geraldine Heaney and Fred Shero in receiving the honor. Chelios and Niedermayer were selected in their first year of eligibility.

Chelios and Shanahan were both part of Detroit’s 2002 Stanley Cup Championship team that included Hall of Fame players Igor Larionov, Brett Hull, Luc Robitaille and Steve Yzerman, and was coached by the legendary Scotty Bowman in his final season behind the bench.

At 1,651 career games, Chelios sits fifth in all-time regular season games played. His 26-season NHL career saw him play for the Montreal Canadians, Chicago Black Hawks, Red Wings and Atlanta Thrashers. Now a part of the Detroit front office, he played in nine NHL All-Star Games and represented the United States in three Olympic Games, two Canada Cups and the inaugural World Cup of Hockey. He won a silver medal in the 2002 Olympics and won the Stanley Cup with Montreal in 1986 and Detroit in 2002 and 2008.

Shanahan won three Stanley Cups with the Detroit – 1997, 1998 and 2002. He played 1524 games across 21 seasons with the New Jersey Devils, St. Louis Blues, Hartford Whalers, Red Wings and New York Rangers. He was a two-time Olympian for Team Canada – claiming the gold medal with them in 2002 – and played in the Canada Cup twice and the World Cup once. Now the NHL’s Director of Player Safety, he scored 656 goals and 698 assists throughout his career.

This year’s class will be inducted into the Hall of Fame on November 11, 2013.