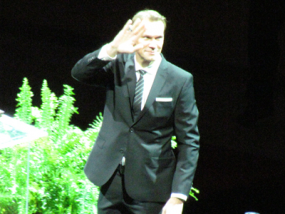 95
0
by Clark Rasmussen
In General News

The Hockey Hall of Fame announced on Monday that two former Red Wings will be included in their Class of 2015.

Nicklas Lidstrom and Sergei Fedorov were elected to the Hall in their first year of eligibility. They join Phil Housley, Chris Pronger, Angela Ruggiero, Peter Karmanos, and Bill Hay in making up the latest class of inductees.

In his twenty-year career, spent entirely with Detroit, Lidstrom won the James Norris Memorial Trophy as the league’s best defenseman seven times, trailing only Bobby Orr’s eight. He won four Stanley Cups with the Red Wings and was named the playoff MVP of their 2002 championship run.

Lidstrom played 1564 career games, with his final season of 2011-12 the only one that saw him miss more than six games. He scored 264 goals and added 878 assists for 1142 career points while taking only 514 penalty minutes.

For the final six seasons of his career, Lidstrom captained the Red Wings, taking over that role after the 2006 retirement of Steve Yzerman.

Outside the NHL, Lidstrom represented his native Sweden four times at the Olympics, winning a gold medal in 2006.

Both Lidstrom and Fedorov were drafted by the Red Wings as part of their legendary 1989 class that included Mike Sillinger, Bob Bougner, Dallas Drake, and Vladimir Konstantinov.

Fedorov played 13 seasons with Detroit before moving on to the Mighty Ducks of Anaheim as an unrestricted free agent. From there he was traded to the Columbus Blue Jackets and then the Washington Capitals. He ended his NHL career in 2009, returning home to Russia to play three seasons in the Kontinental Hockey League with Metallurg Magnitogorsk before retiring.

The pair will be enshrined in the Hall of Fame on November 9, 2015.