Everything the Red Wings had going for them tonight felt like a fluke.

That’s the best way I can sum up today’s Centennial Classic loss to the Toronto Maple Leafs at BMO Field.

Aside from the final two and a half minutes of the game, with Detroit’s net empty and the team down a pair of goals, there was maybe one shift of sustained pressure from the Red Wings all game.

Zone entries were awful, especially on the power play.  I’m shocked at the number of shots the Wings had because I can’t remember a time when it felt like Frederik Andersson was challenged.

The Wings defense got absolutely undressed on at least two of Toronto’s goals, probably three.  Jared Coreau was the only thing keeping the Red Wings in the game.

Then they rattled off a series of improbable goals, capped by one that probably shouldn’t have counted.  Maybe it’s just a case of my eye test failing, but the way I see it, they made what should have been a disaster of a game into one that looked respectable and they got a point out of it.  Some people would take that as a positive.  I don’t. 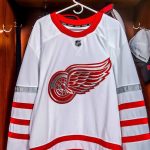 Thoughts on the Red Wings' Centennial Classic jerseys, which were unveiled on Monday. 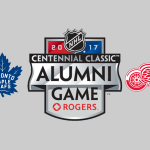 Rosters for the Centennial Classic Alumni Game were announced on Tuesday.