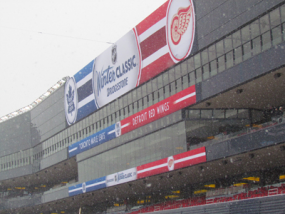 110
0
by Clark Rasmussen
In General

I’ve seen a lot of reports – many out of Toronto, of course – that the Centennial Classic was the NHL’s best outdoor game.

Personally, I think that’s a lot of Auston Matthews love talking.  The league’s (and Toronto’s) newest toy scored the game-winning goal in overtime.  Forget the Wings’ pathetic defensive performance and the Leafs’ complete collapse late, that’s good enough for so many people to declare, “Best! Evar!”

It got me thinking about how I’d rank the Wings’ outdoor games.  It’s hard to put them all on a level playing field, but maybe they’re not meant to be.  As such, here is my ranking.

The largest NHL crowd ever.  Two storied rivals.  The day after an epic pair of alumni games.  In the middle of a snowstorm.  This wins on atmosphere alone.

Unfortunately it wasn’t that great of a game.  Neither the Red Wings nor the Maple Leafs were very good that year and that was only multiplied by the ice conditions.  That said, it was far from a terrible game, which, as I mentioned, the atmosphere more than made up for.

Another Original Six rivalry and a game played in a legendary ballpark.  As just the second Winter Classic, the outdoor games still had their uniqueness.

On top of that, Detroit was just closing out its dynasty-ish run while Chicago was just beginning their ascent.  This was a pair of very good teams.  The Blackhawks dominated the first period, then the Red Wings took over in a pretty great game.

This was a new experience for the Red Wings.  A night, warm-weather, outdoor game.  Under the lights, through the clear air, this game simply looked beautiful.

The game itself was okay, but not great.  The once-fierce Detroit-Colorado rivalry hasn’t been anything since about 2002 (maybe 2009) and while both teams were fighting for playoff spots, that also meant neither team was very talented.  Brad Richards’ late-game heroics made it memorable, but not necessarily good.

As far as the game itself goes, it was probably the most uneven matchup the Wings have faced outdoors.  Detroit is a declining team with a core of aging vets hoping that its youth will step up.  Toronto is on the rise and built around high draft picks.  We got two periods of boring, then the teams traded collapses.  A goal that should have been called back forced overtime.  Ugly stuff.

My daughter was looking over my shoulder while I wrote this and commented on some of the jerseys.  Inspired by her, here are my rankings of the Wings’ outdoor game jerseys:

A classic look, straight throwback to the team’s original uniform.

I’ve complained about this one a lot but, aside from the number font and the wordmark above the logo, this is a solid design.

I still think this design is stupid and I’m disappointed that the Red Wings chose to wear white when they could have worn red against blue as they did in 2013.  This is only redeemed by the fact that it ended up looking good under the lights.

A stupid sash and oversized numbers.  Even if the latter is part of a template, it’s still not good.  These were not redeemed by looking good under the lights.  I do still like that logo, though.