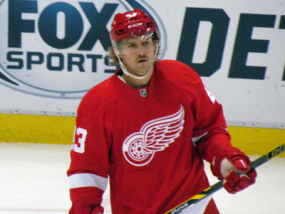 Just Don’t Screw It Up

Ever since Steven Stamkos decided to stay in Tampa Bay without even giving Detroit general manager Ken Holland the chance to make a pitch to him, I can only think one thing.

The lone superstar is off the board and I can’t shake the feeling that the Red Wings are going to do something stupid when free agency opens on Friday at noon.

Unable to get a first line center, they’ll throw money at a fourth-line winger.  Having lost the ability to sign a player in his mid-twenties to a long-term deal, they’ll give six years to someone on the wrong side of thirty.

At this point, the longest contract Ken Holland should be offering is three years.  Much like he did when signing Mike Green last summer, he’ll probably have to overpay, but a short term mitigates that.

I think we’ll see some long-term deals for guys like Kyle Okposo and Franz Nielsen, though.  There’s too shallow of a pool of talent available and too many teams wading through it.

If that’s the case, the Wings should just stay out.  No one available is going to put them over the top.  This team needs too much work to tie up future resources on any of the players they could get tomorrow.

That includes signing their own guys.  Don’t overpay to bring back Darren Helm just because you couldn’t find anyone else.  Don’t throw money at Kyle Quincey because – once again – there was no other move to make on defense.

I don’t expect this, though.  I expect Holland to sign bottom-six guys who he’ll say can play up into the top six, except on this team they’ll be required to.  I hope I’m wrong.