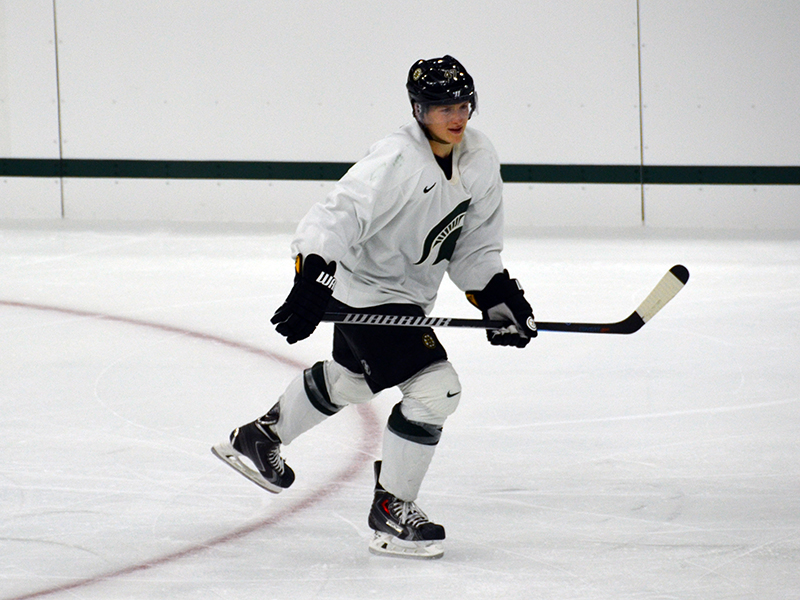 124
0
by Clark Rasmussen
In General

It’s October 9 so, of course, we’re getting ready to kick off NHL free agency.

The Red Wings have been tied to two big names, defenseman Torey Krug of the Boston Bruins and goalie Jacob Markstrom from the Vancover Canucks. Both make some sense but I don’t like either option.

Krug is from Detroit and played college hockey at Michigan State so there’s a “hometown kid” storyline to enjoy there. The Wings, despite depth on the blueline, are shockingly short on talent at the position. Krug would instantly become their top d-man and take pressure off of the still-developing Filip Hronek and the oft-injured Danny Dekeyser.

However, Krug has made it clear that, now that he’s hitting unrestricted free agency, he wants to make sure that he gets paid. That seems to rule out the idea of a hometown discount. He’s coming off a deal that paid him $5.25 million per season. Boston reportedly offered a six-year, $39 million deal in September, which was declined. That’s a $6.5 million cap hit until he’s 35 and it wasn’t good enough.

Meanwhile, Markstrom is reportedly looking for $6+ million per season. This, for a goalie whose career numbers are actually pretty close to what Jonathan Bernier put up before signing his three-year, $9 million deal with Detroit. I don’t actually think that’s a particularly fair comparison but it’s enough to give me pause.

We can be relatively sure that the Red Wings don’t expect to compete for, probably, at least three more seasons. We also know that the Red Wings have a ton of salary cap space for the coming season, so they can throw money around in the short-term without feeling too pinched.

That said, I don’t see Krug and Markstrom as the right signings.

Krug is 29 and projected to sign for something like $8 million per season for at least six years. If the Red Wings aren’t going to compete for the first three of those, you end up in 2024 paying 10% of your salary cap to an aging defenseman at a time when contracts are up for guys like Dylan Larkin and Filip Zadina.

With Markstrom, you’re going for one of the more sought-after goalies on the market, asking for a bidding war, just to put the guy behind a team that isn’t good enough to win on a nightly basis. The goalie position is a problem for the Red Wings organization, absolutely. Throwing money at it now may not be the answer, though.

I’ll admit, I don’t have an answer on defense. I’m shooting down Krug without giving a better option to replace him. Maybe trade is a better way to add on defense, if you were to insist adding on defense was necessary, picking up another Staal-like contract. Or perhaps helping Carolina’s blueline logjam out.

In goal, I’d rather see a second-tier goalie like Thomas Greiss or Cam Talbot. Actually, what I’d really like to see is a deal to take Marc-Andre Fleury from Vegas with a sweetener from the Golden Knights, but Fleury has a no-trade clause and it’s hard to see him wanting to come to Detroit.

Part of the problem is that Detroit is no longer a destination for free agents. Gone are the days where a guy comes on the market and we can say that, of course, he’d want to join the Detroit organization. Just like how Fleury may not want to come to Detroit, players looking to rebound after being bought out might not think the Red Wings are the right team to sign a one-year “show me” deal with.

Which is why it’s hard for me to guess who the Wings should target at forward, where GM Steve Yzerman has also said the team would like to add.

Would recently-bought out Kyle Turris see Detroit as a place he could showcase his skills? What about Anthony Duclair, who wasn’t given a qualifying offer by Ottawa? I’d like to see Detroit go after both but the feeling has to go both ways. Perhaps it’s the condensed offseason but I haven’t gotten the feeling that any free agents see Detroit as a destination without significant money behind it.

And maybe that’s not a problem. Overpay on two-year deals and flip the player for picks at the 2022 trade deadline. They’re off the books in time for the next round of raises.

I just don’t want to see long-term, high dollar deals unless the Red Wings are being paid to take them from someone else.