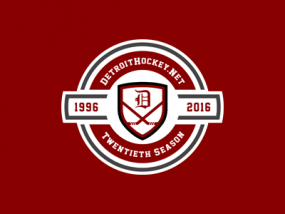 119
0
by Clark Rasmussen
In General

DetroitHockey.Net goes through something of a re-launch today. It’s been a work in progress throughout our Twentieth Season, based on things I’ve learned about technology and things I’ve learned (and re-learned) about what I want to do with the site.

I had grown weary of working on [this site] and realized it was because my own opinion didn’t go into it anymore because I was just repeating what others were saying. Now my opinion’ll be here.

I wrote that on January 1, 2001, in the oldest post preserved on this site.  Fifteen years ago I was unhappy with not putting enough of my own opinion into the site and I’m back at that place today.

By the start of the 2001-2002 I was back to having game recaps be the primary content of what was then still drwcentral.net as that was what all the major media sites did and I wanted to be like them.  Every now and then I’d post an opinion piece but for years I couldn’t figure out what the proper balance between opinion and reporting.  I long ago came to the conclusion that DH.N is never going to be a major media outlet but I kept writing the game recaps.  Maybe it was inertia, maybe it was that I had developed the site around the idea of “news posts” and not opinion pieces.  I don’t really know.  I never had a problem spouting off on Twitter, I just always had a different expectation on the site itself.

Over the last year, though, I’ve started paring down the site’s content.  In the age of Wikipedia, we didn’t need a Red Wings site hosting archives of NHL award winners.  No one came here to see what team plays in which arena.  The DH.N Community Forums were empty aside from the fantasy hockey sections.  And, it turns out, no one cares about soulless, quote-less game recaps, either.

So I’ve kept only the content that is either useful or I just like having around (I mean, there doesn’t need to be an NHL logo archive here but I like it so I kept it).  The fantasy hockey leagues have been spun off into their own site.  With the fantasy leagues gone, the forums are no longer necessary so they’re out, too.  And now I’m ripping out my custom publishing system to make it easier for me to write in whatever format I want.

We’ll see if it works.  I like the new version of the site.  It’s lighter and cleaner.  I know the home page could use some work.  I’ll iterate on it.  That’s part of the fun.


Just Don’t Screw It Up