As rumored yesterday, the Red Wings announced today the signing of goalie Calvin Pickard to a two-year deal.

Until yesterday, I’d been unaware that the Detroit organization wasn’t expecting Patrik Rybar to return, so this deal was not on my radar at all.

Frank Seravalli said yesterday that Pickard should be expected to compete with Jonathan Bernier for the backup role in Detroit while Max Bultman pointed out that seemingly-Grand Rapids-bound Filip Larsson was expecting the team to bring in a veteran to work with him on the Griffins.

Given the money involved, I have to think the Wings have Pickard slotted in for GR, but even that is problematic.  It was just last fall that Pickard was headed to the Toronto Marlies to start the season when he was claimed on waivers by the Philadelphia Flyers.  Another rash of goalie injuries like we saw last year and the Wings could lose whichever veteran they try to send to the Griffins, leaving Larsson alone there.

That said, much has already been made of the free agent goalie-go-round.  It’s possible that whoever gets left out on that ride would be available to a team facing an injury, so this year is a little different from last year. 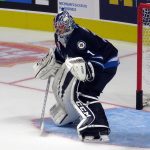 The Red Wings moved to fill their gap in goal by trading defenseman Vili Saarijarvi for goalie Eric Comrie on Saturday. 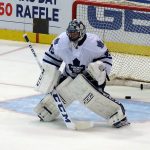