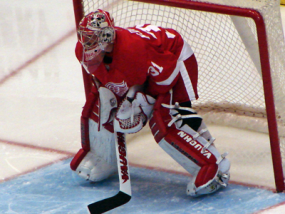 The Detroit Red Wings announced the signing of goalie Joey MacDonald to a two-year deal on Monday. As per club policy, financial terms were not announced.

MacDonald had been expected to leave the Detroit organization as a free agent this summer. He was seeking a one-way deal in the NHL, which the Red Wings were unwilling to provide. Presumably such a deal could not be found, leading MacDonald to return to the Wings on a deal that is expected to be two-way.

In 15 games last season with the Red Wings, MacDonald went 5-5-3 with a 2.58 GAA and .917 save percentage. He has played 87 career games with Detroit, Boston, the New York Islanders, and Toronto.

In speaking with Red Wings blogger George Malik, Detroit assistant general manager Jim Nill called the deal, “Just a little insurance policy,” implying that MacDonald will not be the backup to Jimmy Howard this season.