Let me say off the bat that I hate this idea. 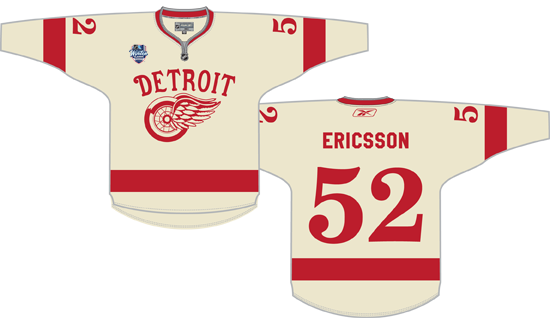 From the t-shirt design we can see that the Wings would be using their oversized “fancy” numbers from the 1982-83 season, the only year they did not wear block numbers. Oddly enough, the t-shirt does not feature the vertically-arched lettering introduced that same season (and carried on to this day), instead showing a standard block font.

On the front, the original Winged Wheel appears under “Detroit” in an “old-timey” font similar to the “fancy” numbers.

The shirt is in red with standard white accents but because we’ve heard before that the Wings would be in a “vintage white” sweater, I’m assuming the palette swap is because no one would buy a dirty white t-shirt, so my mock-up is in cream with red accents.

I’m also assuming that the Wings wouldn’t break out the “fancy” numbers without putting them on the sleeves, so I eschewed the 1928-29 striping pattern for one that would leave room for sleeve numbers.

This design actually includes several of my previous design elements. The city name arched over the logo from the 1928-29 sweater is used, as is the original Winged Wheel. The striping pattern, though unconfirmed, is from the 1934 white jersey and a standard block font is used for the nameplate.

The specifics are where it goes wrong, in my opinion.

I have no problem with mixing eras in a fauxback jersey or throwing back to an era as recent as the 1980s. That said, choosing the “fancy” numbers as one of your key design elements is just wrong. This is something that was such a bad idea it only lasted for a season. There is nothing particularly endearing about the Reed Larson-led 1983 lineup that this could be an attempt to evoke the memory of.

On the front of the jersey you have the same problem that the Vancouver Canucks’ current jerseys have: There’s too much going on. A full-sized logo with the city arched over it just looks messy. The Dallas Stars (and many collegiate teams) show that you can use the city name on the front of the sweater just fine if your other design element (be it the player’s number or a logo) is smaller.

Additionally, there’s something needlessly sloppy to me about using the “old-timey” font for “Detroit” on the front. It’s not something that has ever been part of the team’s identity. To me, the text actually looks of the “painted on the side of a Volkswagon bus in the 1970s” style, so I don’t know what era it’s supposed to represent.

Maybe it doesn’t matter and I’m way off on what I’m reading from this t-shirt. As I’ve said before, I have no advance knowledge of what the teams will be wearing, this is my semi-educated guess. As I’ve also said before, I know my template isn’t quite right but I’m too lazy to fix it right now. 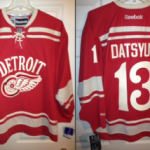 Was the Red Wings' Winter Classic Jersey Leaked Via eBay?

Is the subject of a recently-ended eBay auction for a "rare Pavel Datsyuk Detroit Red Wings Reebok throwback alternate jersey" what we can expect to see the Wings' wearing when they host the Toronto Maple Leafs in the 2014 Winter Classic? 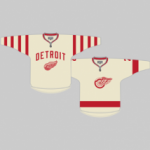