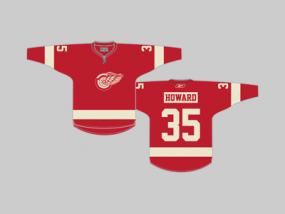 This one is one that many people were clamoring for the last time I rolled out a Winter Classic concept, having its roots in the first jersey worn in Detroit after the team changed its name to the Red Wings.

Why I started with the 1932 sweater as a basis:
There were a lot of people calling for a Winter Classic jersey with the Winged Wheel on it, which I agree with.  The 1932 jerseys marked the first appearance of the Winged Wheel in Detroit so there’s a lot of history behind it.  While I made a lot of changes from the original sweater design (noted below), the main similarity is that the old-school version of the Winged Wheel is used and that the wheel itself is centered on the chest, rather than the version we have now where the entire logo is centered.

Why I made the changes I made:
While I say the 1932 jerseys were the basis of this design, that’s really just the logo.  Solid numbers weren’t worn on the back until 1937.  Numbers weren’t added to the sleeves until 1961.  The red jersey didn’t get a nameplate until 1977.  The white stripe was only lifted off the hem from 1983 until 1986.

I feel like the sleeve numbers and the nameplate had to be added.  There’s no excuse for no sleeve numbers with that much empty space on the arms, unlike some previous designs (of course, I would have said that about the design the Red Wings used in 2009, too).

The nameplate uses a serifed font like the Wings use in the preseason.  I went with the current trend of an opposite-colored nameplate simply because it is a trend.  For the same reason, the white used is a “vintage white” while the red is a “vintage red” that’s darker than the usual red.

The white stripe was moved off the hem because I don’t like how the hem looks in the Edge jersey cut.  It’s also one more thing slightly different from the current jerseys in a design that’s already pretty similar to what the Wings wear now.

Other design decisions:
As with my previous designs, I would expect this design to include a lace-up collar, I just don’t have a template that can show it.  I could also see something like this being done but in standard Detroit colors and/or without the opposite-colored nameplate.

Additional reasons I think this could be worn:
The main reason I could see the Wings’ rolling out something like this is the same reason so many people wanted to see it: The Winged Wheel.  This gives them a vintage look while still featuring their famous logo.

Previous Designs:
For the record, here are the links to my previous Winter Classic concepts…
Concept #1 (February)
Concept #2 (May)
Concept #3 (June 4)