I’m going to get some of my thoughts out of the way before this deal is officially announced.

One of the comments I heard today was “I would have only done six years.” That kind of comment bothers me.

If the rumors are true, this deal is structured so that its length is what pays for the incredibly nice cap hit. The last two years of this deal are supposedly at $1 million each. Zetterberg does not sign a six-year deal where the last two years are that low, which means your six year deal has a cap hit of $7 million instead of $6 million.

Yes, the length is something to be worried about but because of when it’s being signed the Wings have several outs.

Basically, Ken Holland has done everything he can to protect the team here, and I trust that.

Hours after his agent revealed that Pavel Datsyuk was close to coming to terms on a contract extension with the Detroit Red Wings, Datsyuk himself confirmed that the two sides had agreed to a three-year deal. 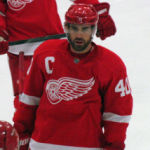