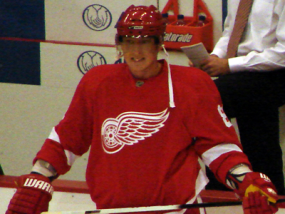 The Detroit Red Wings were without two of their top three forwards and two of their top four defensemen Tuesday night and the Columbus Blue Jackets took advantage, with their top player scoring all three of the team’s goal in a 3-2 overtime win.

The Red Wings started the game short a man due to the suspensions of Nicklas Lidstrom and Pavel Datsyuk and the injury of Brad Stuart. They then lost Henrik Zetterberg to back spasms with about 5:00 left in the first period.

Rick Nash scored on the power play, while shorthanded, and during the four-on-four overtime to carry his team to the win. Detroit got goals from Marian Hossa and Brett Lebda.

Hossa opened the game’s scoring on a power play at 8:55 of the first period, banging home the rebound of a Niklas Kronwall shot from the blue line that missed the Columbus net.

Nash tied the game with 8:55 left in the second period, scoring a shorthanded goal on a breakaway after a giveaway by Derek Meech.

Lebda put the Wings in front again 29 seconds later, hesitating at the blue line to let a screen form in front of goalie Steve Mason before blasting a shot over his shoulder.

Nash’s power play goal evened things up less than two minutes after that as he scored on a seemingly-harmless shot from along the goal line that deflected off of Brian Rafalski before bouncing off of netminder Chris Osgood’s back and in.

The game-winning goal came 3:27 into OT when a bouncing puck came to Nash at the side of the net and he put it in behind Osgood.

Osgood finished the night with 20 saves on 23 shots against. Mason made 21 saves on the same number of shots.


Thoughts on the Zetterberg Extension