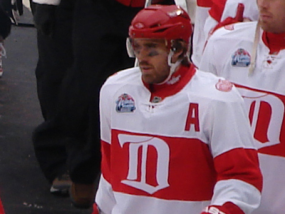 The deal is essentially a lifetime contract for Zetterberg as it will keep the 2008 playoff MVP in Detroit until he is forty years old.

As per club policy, financial terms were not announced. Reportedly the deal is a front-loaded contract worth $73 million for a cap hit of just over $6 million.

Both sides described the negotiations – which began last summer – as long. Zetterberg joked, “I’m real happy I don’t have to do it again.”

“I believe I have twelve years in me. I don’t wanna play anywhere else.”


Stuart on IR, Leino and Downey Called Up