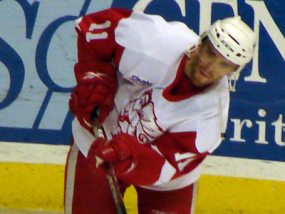 Stuart was injured during the Wings’ matchup with the Phoenix Coyotes, suffering rib injuries after slamming head-first into the boards.

The Red Wings are opting not to replace Stuart on defense, instead adding some depth to the forward ranks by calling up Ville Leino and Aaron Downey from the Grand Rapids Griffins. Both players will be available for tonight’s matchup with the Dallas Stars.