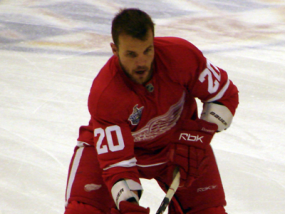 Aaron Downey returns to the Red Wings lineup tonight as Detroit hosts the Dallas Stars. Downey has spent the entire season thus far with the Grand Rapids Griffins but was called up with Ville Leino today when Brad Stuart was placed on the long-term IR.

Pavel Datsyuk and Nicklas Lidstrom also return to the ice, having served their suspensions.

The Wings will be without Henrik Zetterberg, whose back spasms have continued. Downey takes his spot in the lineup instead of Derek Meech being shifted to forward again. Meech joins Leino as a healthy scratch.

Chris Osgood gets another start in the Detroit net.

Marty Turco will go for Dallas, who will be without Mark Parrish (flu) and Fabian Brunnstrom (AHL conditioning stint) in addition to long-term injuries Brenden Morrow and Sergei Zubov.

I’ll be missing the start of this one as I’ve got another 7:30 soccer game. I’ll catch up when I get back.