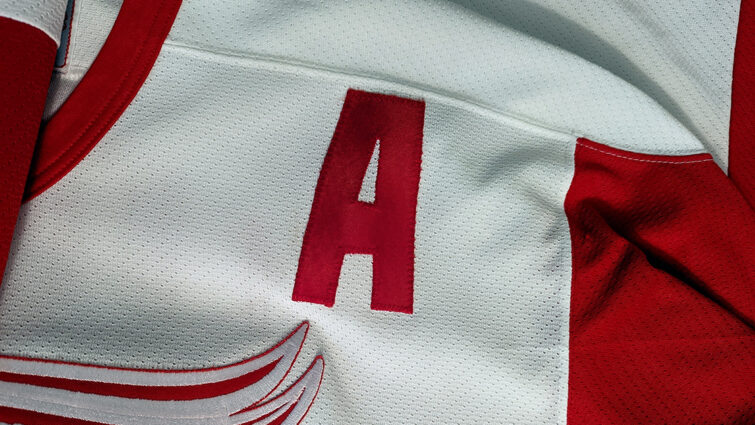 A few days ago, the Red Wings’ beat writers reported that head coach Derek Lalonde implied that the team would not immediately name new alternate captains to replace the departed Danny DeKeyser and Marc Staal.

Lalonde made it sound today like no assistant captains will be named immediately to start the season. There is no hurry. #RedWings

That may be true. There might not be a press release and a social media push.  But with DeKeyser and Staal gone, someone is going to be wearing the “A” when the season opens on Friday and I still think we can look at the preseason rosters to figure out who that will be.

As I noted a couple weeks ago, last year, when the Wings were also looking to fill both alternate captaincy slots, the “A” went to two of the players who wore a letter in each of their preseason appearances.  This year there’s a new coaching staff who may be thinking of things differently.  In fact, we already know they are, given Lalonde’s comments about not naming alternates.  That said, this year, there were only two players who wore the “A” in every game in which they appeared.

Jordan Oesterle wore an “A” once, in the Red Wings’ preseason finale in Toronto, as part of a Griffins-heavy lineup.  He appeared in three games without a letter prior to that.

Adam Erne is in a similar situation, having been an alternate in Toronto but in none of his other four games played.

Tyler Bertuzzi missed much of the preseason and wore an “A” with a depleted lineup in Washington, going without a letter in either of the other two games he played.

Filip Zadina wore the “A” twice; both times with those light lineups in Washington and Toronto.  He played four games without a letter.

Michael Rasmussen, Olli Maatta, and Filip Hronek all wore a letter in the Red and White Game in Traverse City and continued to do so throughout the preseason.  Rasmussen was an alternate for three preseason games while Maatta and Hronek were for two.  Perhaps the most-notable games are the ones where Detroit hosted the Penguins and Maple Leafs, two “dress rehearsal” games where none of the three wore a letter.

In both of those two games, the alternate captains were David Perron and Ben Chiarot.  They are the only two players to wear an “A” in every game in which they appeared this preseason.  This leads me to believe that, press release or not, they’ll be the alternates when the season opens on Friday.

Andrew Copp did not play during the preseason and he was on my personal shortlist of alternate captain options.  If the Red Wings are also considering him, the exhibitions wouldn’t have shown us anything about that.

Additionally, the two games where Perron and Chiarot wore “A”s instead of any of the others who had them during the preseason were both home games.  It is possible that they just went easy on the equipment staff and didn’t ask them to move the letters around.  Chiarot, in particular, only appeared in home games.  If the team were doing some kind of home/road rotation, which they’ve done in the past, his preseason schedule wouldn’t account for that.

But if the point was to keep things easy on the equipment staff, the Wings certainly did something interesting to close out the preseason in Toronto.

For the Red and White Game, Detroit moved their captains’ letters back to the left side of the chest for the first time since 2007, seemingly shrunk down and off the tip of the wings in the logo. 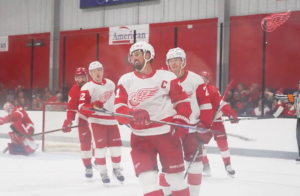 By the time exhibition games were played, the letters seemed to have been restored in size and moved up above the tip of the wings. 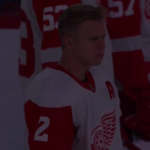 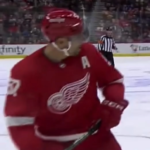 But for the last game in Toronto, the letters were back to the right side of the chest. 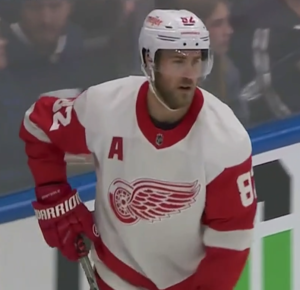 It’s worth noting that Zadina wore the “A” on both the left and right side in a white jersey, so it’s not “just” a matter of the sweaters having been customized wrong for the final game of the preseason or anything.

It’s probably meaningless, much like tracking how many times each player wore a letter through the preseason, but it’s interesting nonetheless.