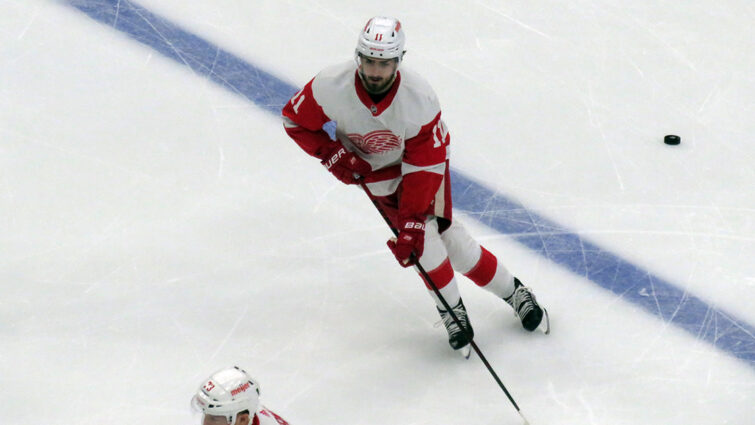 The Red Wings open up the 2022-23 season tomorrow and, after a few days of questions, the roster for their first game of the season is known.

Derek Lalonde said the lines from practice today will be the lines for tomorrow’s season opener:

For the first night of the season, at least, that leaves Filip Zadina, Pius Suter, and Jordan Oesterle on the outside looking in.  Jake Walman has been skating in practice on the “fourth pair” with Oesterle but is out having had shoulder surgery over the summer.

Since the Red Wings’ initial roster was set on Monday, there was some question as to how the lines would work out.  Up front, Andrew Copp and Oskar Sundqvist missed all of the exhibition season recovering from injury, as did Robert Hagg on defense.  Apparently they’re all ready to go.

The thing that jumps out at me about this lineup is that it doesn’t feel like the Wings are asking players to do more than they’ve shown themselves to be capable in the past.  Over the last several years, the opening night roster has had gaps on defense or on the second line.  A second- or third-pair defenseman was being asked to step up.  A third-line center was bumped up to the second line with the hope that they would make the most of the opportunity.

This year there is a very clear first line (the same as was rolled out last year), a very clear second line, a third line with some questions and a lot of potential, and a flexible fourth line.  On defense there’s a clear first, second, and third pair.

The questions on the third line aren’t even the same level of questions the Wings’ lineup has faced over the last several seasons.  Recently, if a player being asked to step into a bigger role couldn’t cut it, the Wings didn’t really have anyone who could replace them.  This year, if Elmer Soderblom doesn’t work out right away, he can go down to Grand Rapids to get more playing time, Givani Smith can come back up, and Filip Zadina or Pius Suter can slot back into the lineup.

This year Detroit has the benefit of more depth than they’ve had in seemingly ages.  And that’s even with Robby Fabbri out injured until midseason.

The big question for me is what happens to Zadina if Soderblom does work out?  Zadina did everything asked of him in the preseason and was praised for it, but finds himself on the outside looking in now.  If Soderblom stays in the lineup and if there aren’t any major injuries, how long should he (and to a lesser extent, Suter) be expected to be good soldiers in the press box?

I recognize that Zadina is running out of opportunities (and also that “if there aren’t any major injuries” is a stretch), but he got a show of faith in the form of a new contract over the summer and that aforementioned praise through the exhibitions, it’s just weird (for lack of a better word) to see him in this position now.  Personally, I’d rather have him in and Adam Erne out.

The season is long and Detroit starts with games on back-to-back nights.  Things can change pretty quickly.  If the biggest question is about how Filip Zadina fits, that’s a major improvement over where they’ve been in recent history.  I’ll take it.