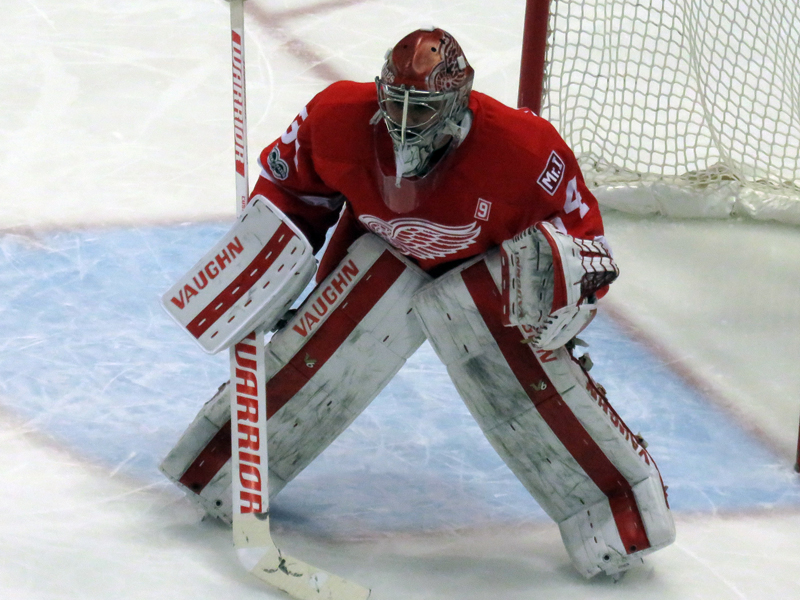 I don’t buy it.  I’m just going to come out and say that up front.

Yesterday morning the surprise news dropped that the Red Wings were leaving Petr Mrazek available in the expansion draft, opting instead to protect Jimmy Howard.

By the end of the day, MLive’s Ansar Khan had released a piece declaring that Detroit “seemingly soured on Mrazek due to a combination of performance and attitude.”

Performance?  Absolutely.  Howard had a career year in which his playing time was limited due to injury.  In his absence, Mrazek – who was supposed to be the starter anyway – put up a career-worst 3.04 GAA and .901 save percentage.

Khan points to Mrazek’s unhappiness with losing starts to rookie Jared Coreau – specifically the outdoor Centennial Classic game in Toronto – as a sign of his attitude problem.  I’d argue the opposite: If – in the middle of a down year and lost starts – your goalie is happy with how things are going, you’ve got a problem on your hands.

According to Khan, there were also off-ice issues – which we conveniently heard nothing of until the day Mrazek was left unprotected for expansion.

Part of the reason Mrazek’s luster has faded could be due to deportment issues that can be traced to contentious off-season contract negotiations (they settled on a two-year, $8 million deal; Mrazek will be a restricted free agent in 2018).

Mrazek was not happy the Red Wings were unable to trade Howard in the off-season and let the club know in less-than-tactful terms.

Were Mrazek’s contract negotiations contentious?  I’m sure they were.

Going into last summer, Mrazek had claimed the starting role in Detroit, a spot the team had been paying Howard $5.3 million to occupy.  This is just conjecture, but it’s easy to see how Mrazek would think he was worth that money and the Red Wings wouldn’t want to have to pay him that.  Of course it’s going to be a contentious negotiation.

Mrazek was handed the starter’s role and was upset that the team kept around the previous starter?  I was upset about that, too.  I’m not going to fault Mrazek for being frustrated with Ken Holland’s tire kicking not finding a taker for Howard.

I think you could just as easily spin this as saying that Holland and the Detroit brass have thin skin and can’t handle being criticized.  Is is a bad move by Mrazek?  Uhh, yeah, don’t go making your boss angry.  Does it mean he has a bad attitude?  I wouldn’t say that, and I certainly wouldn’t base roster decisions on it.

There’s also the timing of this to consider.

Mrazek’s contract negotiation took until the 11th hour, which doesn’t happen without at least a bit of contentiousness, but there was never any publicized indication of lingering animosity from that.

Similarly, nothing was made of Mrazek’s frustration with Holland being unable to deal Howard.

The “oh, by the way, all this horrible stuff has been happening in the background, trust me” tone makes it feel like a hit piece to me.  The timing is just too convenient and I don’t trust it.


How Losing Players in Expansion Can Help the Wings