I wrote yesterday (and ranted on Twitter before that) about the Red Wings leaving Petr Mrazek unprotected for the expansion draft but I should make something clear: No player the Golden Knights claim is going to immediately hurt Detroit to lose.  In fact, many of them would be addition by subtraction.

Oh, there are players that might sting more than others but even Mrazek (among others) is “only” a problem from an asset-management perspective.

Petr Mrazek
I’ll get this one out of the way first.  If Mrazek is claimed it clears $4 million from under the salary cap and solves the Wings’ goalie logjam.  Since all of the hit pieces went out, Mrazek probably doesn’t even want to come back to Detroit, so that awkward situation is resolved.  Jimmy Howard was the better goalie last year so assuming he can keep that up, the Wings actually upgrade in goal (if you’re comfortable making that assumption about a 33-year-old goalie).

Riley Sheahan
If Sheahan is claimed, the Wings get $2 million back on the salary cap and lose a player who can probably be replaced by Tomas Nosek.  Like Mrazek, there’s an asset-management issue here, as Sheahan was reportedly worth a first-round pick in trade and the Wings are risking giving him away for nothing.

Darren Helm
Helm is a little less replaceable but his contract is an albatross.  Getting out from under it would be helpful a few years down the road.  Supposedly other teams were interested in signing him last summer, so maybe he has trade value that would be forfeited.

Jonathan Ericsson / Niklas Kronwall
While there would be a PR hit from losing alternate captain Kronwall, both of these defensemen are somewhat replaceable and carry relatively large contracts.  Both have negative trade value, so unloading one via expansion would be useful.

Ryan Sproul / Xavier Ouellet
These are the players that could sting most to lose (outside of Mrazek).  Giving up young, cheap defensemen for nothing is never good.  Given their play to-date, they’re probably replaceable, but given their youth we can’t say that for sure.

Jared Coreau
The Golden Knights aren’t going to pick Coreau but if they did it’d leave the Wings with two goalies with NHL experience in the system, one of whom they just burned bridges with.  Ouch.  Perhaps there’s some entertainment value in that.

Any of the other Griffins names or free agents
Include Coreau in this one.  If Vegas were to, for some reason, claim someone who spent most of the season in Grand Rapids, it would mean Detroit’s roster survived expansion intact.  Of course, whether that’s a plus or a minus is really a matter of opinion.

One thing to consider in all of this is that cap space may not matter if the Wings are rebuilding.  Rebuilding means not signing big-name free-agents, so cap space becomes less important.

Term, however, can start to matter.  Helm and Glendening have the longest deals available, so having those off the books might not be helpful immediately but could pay off down the road.  Which is why the Golden Knights won’t claim them. 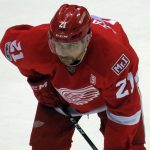 A look at the players slated to return to the Red Wings next year and options for changing the Detroit lineup.