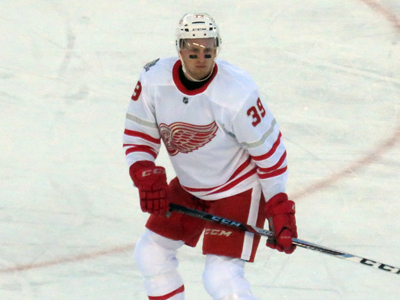 On Benching Mantha and Learning Lessons

I’ve Tweeted a bit about being unhappy with Anthony Mantha’s benching for the Red Wings’ 4-2 win over the Chicago Blackhawks on Friday night.  With him skating as the extra forward again in Saturday’s practice and his status for today’s game against the New York Rangers unknown, I’ve been thinking about it a bit more.

Mantha said all of the right things about being a scratch.  He talked about needing to compete more and about playing at both ends of the ice.  He talked about the team playing well in the game he missed.  And of course he did.  What else did you really expect him to say?

So let’s assume that sitting a young guy is an effective way to teach him a lesson.  The beat writers seem to be running with the fact that Andreas Athanasiou responded to being scratched earlier this year by scoring a goal and two assists in his next game as proof that scratching works, after all.

If that works, where does it end?  Why is 22-year-old Mantha young enough for this method to teach a lesson but 25-year old Riley Sheahan is too old for a benching to get him to focus on the offensive aspects of his game?

Also, is there an additional lesson being learned here?  While Mantha – or Athanasiou or Ryan Sproul before him – sits, Niklas Kronwall and Danny DeKeyser play every night, no matter what mistakes they make.  Could that not teach resentment?  Could that not show a young player that he is an acceptable target but a seemingly worse player is safe?

Mantha is saying all the right things.  That doesn’t mean he’s learning exactly what the Wings’ brass wants him to.


Random Thoughts: Closing the Joe with a Win vs. a Higher Draft Pick