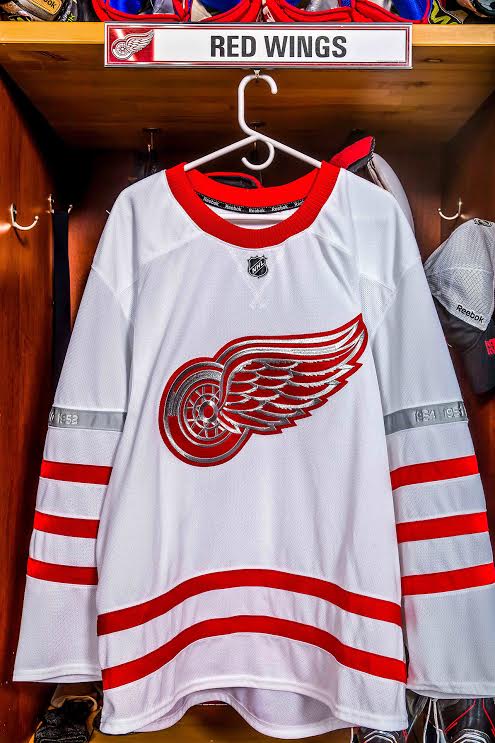 The Red Wings revealed their jerseys for the Centennial Classic on Monday.

Here’s a look at the jerseys that the #RedWings will wear for the 2017 Scotiabank @NHL #CentennialClassic. #LGRW pic.twitter.com/f0zJaLV5Zs

Per the press release, the years of Detroit’s Stanley Cup Championships will be included in each of the silver sleeve stripes.

The four sleeve stripes are taken from the 1928-29 Detroit Cougars’ sweaters.  The silver accents are in honor of the league’s centennial and are also included on the jerseys that the Toronto Maple Leafs will wear.

It will surprise no one that I’m not thrilled with these, but I don’t hate them by any means.

First and foremost, I wish that this was going to be another red vs. blue matchup, as the 2014 Winter Classic between these two teams was.  I think this design would look much better with the red and white swapped.

The silver is bad but we knew it was coming once we saw the Maple Leafs’ jerseys.  I can live with it.  I think if it’d been a red jersey, all four striped could have been silver (or white outlined in silver) and it would have looked better.

My biggest complaint is that the top half of the jersey looks empty.  That said, once sleeve numbers and a Centennial Classic patch get added, that might not look as bad.

I’m curious what the numbers will look like.  I’m guessing solid red but red with a silver outline would also make sense.  Again, this is a case where a solid red jersey with white numbers and silver trim would have looked better.


On the Pistons’ Move to Little Caesars Arena