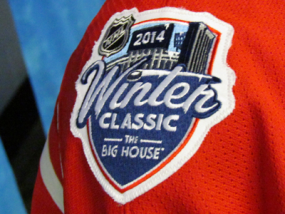 The game was officially announced at a Joe Louis Arena press conference on Sunday, though the matchup had been assumed since the league cancelled the 2013 edition of the event. The Red Wings were due to host the Maple Leafs at The Big House on January 1 of this year before that game was lost to the lockout that kept the current season from beginning until late January.

Also revealed on Sunday were the jerseys the two teams will wear at the Winter Classic, which turned out to be not so much of a secret, either.

As leaked by a pair of eBay auctions in February, the Red Wings will wear a “fauxback” red jersey while the Maple Leafs will sport a sweater largely inspired by the team’s second sweater, worn from 1930 to 1934.

Detroit’s jersey features the original 1932 version of the Winged Wheel under the word “Detroit” in an arched “fancy” font. The text matches the jersey numbers, inspired by the team’s 1982-83 jerseys. A pair of “antique white” stripes accent the upper chest while a thicker pair of stripes adorn the bottom of the body and the sleeves. The white collar features laces.

The team has never worn the Winged Wheel under the city name, nor has it used the “fancy” font on the front of the jersey in the past. During the 1928-29 season, the team – then known as the Detroit Cougars – wore “Detroit” in a radially-arched block font over a cougar head on the front of their sweaters.

In a unique element, the captain’s C will appear in a red diamond on the jersey’s left sleeve, inside one of the white stripes.

The jersey “respects the history and tradition of the Detroit Red Wings” according to Detroit general manager Ken Holland.

The Maple Leafs’ sweaters feature their original maple leaf crest. Four sets of white stripes appear on each sleeve, with each set made up of a thick stripe flanked by a pair of thin ones. Unlike in the team’s original jerseys, player numbers appear above the top set of stripes in a block font. The same pattern as is used on the sleeve stripes carries into a stripe across the top of the shoulders.

With the Red Wings wearing red and the Maple Leafs wearing blue, it will mark the first Winter Classic in which both teams wear dark colors, eschewing the modern trend of one team wearing white. In the early days of the league, teams wearing dark against each other was a common occurrence but the similarities between the uniforms of the Red Wings and the Canadiens led to the rise of white away jerseys. By the 1951-52 season, every team had a white jersey, with the New York Rangers being the last to adopt one.

With the unveiling of the jerseys, the 2014 Winter Classic logo was also revealed. It will be virtually the same as the one previously used for the 2013 game, with the most noticable difference being that the NHL shield has shifted to the left to make room to show the silhouette of the Michigan Stadium scoreboard, on which appears the “2014” text. The logo will be worn as a patch on the right shoulder of both jerseys.

The teams also unveiled sweaters for the pair of alumni games to be played at Detroit’s Comerica Park prior to the Winter Classic, modeled by Joe Kocur and Darryl Sittler. The Red Wings alumni will wear an inverted version of the team’s 2009 Winter Classic jersey while the Maple Leafs will wear jerseys from the 1980s.