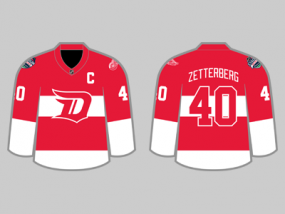 15
0
by Clark Rasmussen
In General

The Red Wings unveiled their 2016 Stadium Series jerseys on Monday and reaction has been… Let’s go with “mixed.” I’m sure they’ll sell a bunch of them because that’s how this works but I can say I won’t be adding one to my collection.

What bothers me is that there are design elements included seemingly for the sake of including them. Specifically the “sash” across the front and the giant sleeve numbers.

The sleeve numbers are a Stadium Series tradition. You pretty much knew they’d be included. They’re a bad tradition, though. No one has ever said, “Man, those giant numbers look awesome!” They try to pass it off as being for the fans in the stands, seated so far away that they need bigger numbers to identify the players. This, though, ignores the fact that the Winter Classic jerseys do not include giant numbers. I mean, the Red Wings played in the 2009 Winter Classic (which was also at a baseball stadium, so the difference between football and baseball stadia can’t even be cited as an excuse) without any sleeve numbers.

The sash, according to the Red Wings, “celebrates the iconic stripe of this storied Original Six franchise.” For the life of me I don’t know what iconic stripe they’re talking about. The hem stripe that has appeared in some form or another on Detroit’s jerseys since they became the Red Wings? Hardly iconic, as it’s a design element shared by many teams. The chest stripe of the 1926-27 Detroit Cougars? It’s been worn for all of two games in the last 88 years.

The sash and the large numbers are contrived. They’re not necessary.

That especially annoys me because the stylized D logo created for the Stadium Series is really sharp. I get that they use these games to try out new things and, in that context, I appreciate this new logo. Yeah, I think it looks like something from the Zephyr X-line. No, I don’t ever want it anywhere near Detroit’s actual jerseys. For this game, though, I’m okay with it.

The Stadium Series jerseys were close. That they were makes the stuff they got wrong that much more glaring. Here’s my take:

The sash is replaced with a white stripe similar to that of the 1927 Cougars or Detroit’s 2009 Winter Classic set. Unlike in those sweaters, the logo extends outside the boundaries of the stripe, similar to the numbers on the back. We know this works because those numbers are the ones worn by the Red Wings in the Alumni Showdown at Comerica Park.

The sleeve numbers are a normal size because anything else isn’t necessary.

We keep the sleeve stripes as-is but add a hem stripe because this is meant to be worn with red gloves and pants so we want to break up that block of color a little bit more. The hem stripe allows us to incorporate another element from Detroit’s standard home jersey.

The “Red Wings” text from the collar is eliminated because I just think it’s gaudy.

In going with this design we can justify all of the elements. Nothing is there just for the sake of throwing something on a jersey.