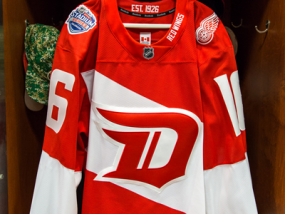 22
0
by Clark Rasmussen
In General News

The Red Wings and Avalanche will meet at Denver’s Coors Field on February 27, 2016. As per tradition, both teams will be sporting newly-designed alternate jerseys.

The sleeves are adorned with oversized numbers, another Stadium Series tradition. The sleeve cuffs are white, as are the team’s gloves and pants. A white sash-like stripe cuts across torso from right shoulder to left hip.


Red Wings Stadium Series Jerseys: How it Should Have Been